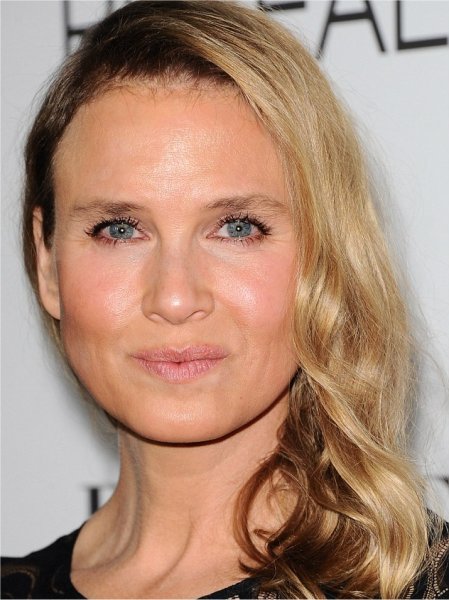 She’s well known for transforming her appearance for movie roles.

But off-screen Renee Zellweger, 45, displayed an astonishingly different look at ELLE’s 21st annual Women In Hollywood Awards at the Four Seasons Hotel in California on Monday.

The Jerry Maguire actress looked almost unrecognisable with her super line-free forehead, altered brow and suspiciously puffy face, although she has never admitted to getting surgery.

She wore her blonde hair in a wispy side-parting, and kept her makeup natural, opting for a light touch of mascara and a slick of pink lipgloss.

Her choice of dress was a winning look, a black knee-length frock with sweetheart neckline and a sheer embroidered back and sleeves.

She teamed it with gold pointed pumps by Christian Louboutin and carried a matching clutch.

Dr Alex Karidis of London’s Karaidis Clinic , who has never treated Renee, told MailOnline he believes Renee may have had an upper eye lift.

He reasons: ‘the distance between the brow and her eye is much smaller than before.’

According to Dr Karidis, the 45-year-old’s brows don’t appear to be higher than before, suggesting she hasn’t had a brow lift.

Karidis says her flawless forehead could be down to the use of Botox.

He said: ‘Her forehead is smooth – you would expect more expressive wrinkles when she smiles which indicates a possible small dose of Botox between the eyelid and eye.’

Last year the blonde beauty spoke to The Express about staying healthy and explained:

‘I have a lifestyle that involves keeping my sanity by going to the gym.’

Dr Yannis Alexandrides, MD at 111 Harley Street who has also never treated Renee, states that some of the actress’s change in appearance could be primarily down to non-surgical procedures.

He told MailOnline: ‘At 44, Renee should have some signs of wrinkles and loss of elasticity, however her face is line free and smooth, which suggests to me that she may have had a Thermage treatment.

‘The procedure uses radio frequency to tighten elastin fibres and stimulate collagen and gradually improves the quality of the skin and tissue over a period of six months – it’s a popular option for patients who are interested in a face lift but aren’t ready for surgery.

‘In Renee’s case, her cheek bones and jaw line at the beginning of her career are significantly higher and more defined. Fast forward fifteen years and both of these features appear altered.

‘This smoothing of angles around the jaw and cheek could be due to fillers, which add volume to the face and erase fine lines and wrinkles. In addition, the skin on the forehead looks incredibly smooth which is normally achieved with Botox injections, which require a top up every 3-4 months.’

Meanwhile, while it is unknown whether Renee will star in the third instalment of the Bridget Jones movie, she told recently E!: ‘It would be fun.’

However, she revealed she doesn’t know what’s going on with the highly anticipated film, which will not star Hugh Grant, who played her love interest, Daniel Cleaver.

Renee is rarely seen in public these days, although she did attend a screening of the documentary Long Shot: The Kevin Laue Story in Los Angeles, where she was once again the subject of surgery rumours.

She looked unrecognisable with a frozen wide-eyed look, but it was her permanent deer-caught-in-the-headlights gaze that stood out, as it was drastically different to her usually half-hooded eyes.

Renee has been dating musician Doyle Bramhall II for the last two years and he accompanied the star to the awards on Monday evening.

The pair kept a close distance as they amorously strolled down the red carpet together. Doyle opted for an all-black suit and accessorised with some leather necklaces.

The pair were university students together in Texas during the nineties and rekindled their relationship years later.

A source told Radar last year that Renee is thinking of adopting children with Doyle. The insider said: ‘She knows that she probably missed the boat on carrying and giving birth to a child.

‘Renee tries to find the positive side of things, she knows 45 isn’t too old to be a mum,’ the source said.

‘It will just have to happen a little differently than she always imagined it would.’

‘She gets down about not having a family yet. She really thought that she’d be married and raising kids out in the Connecticut countryside by now.’

‘She always wanted to have a partner who is dying to share the adventure of parenthood with her. She really wanted the situation to be perfect – and it seems like it’s getting there.’

The guitarist does have a daughter, India, already with ex-wife Susannah Melvoin.

Meanwhile, Renee is set to be thrusted back into the limelight as she has landed the lead role in the forthcoming big screen version of the best-selling book, Same Kind Of Different As Me.

MailOnline has contacted a spokesperson for Renee Zellweger for comment.

How Taylor Armstrong Has Moved On After Russell’s Suicide