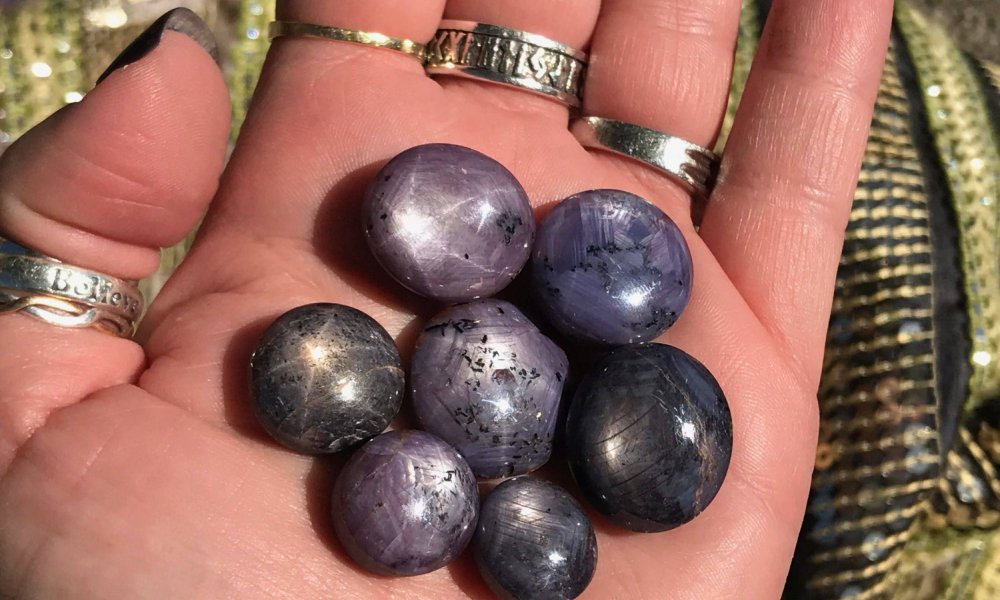 What are Star Rubies?

Star Rubies are a rare variety of the gemstone Ruby. These magnificent gems display a sharp six-rayed star which seems to glide and shimmer magically across the surface of the gem when the latter is moved. This is caused due to an optical phenomenon known as “Asterism“. The star is best visible when the star ruby is seen in a single light source such as sunlight and spotlight.

Star-effect or “asterism” is caused by the dense inclusions of tiny fibers of rutile (also known as “silk“). The stars are caused by the light reflecting from needle-like inclusions of rutile aligned perpendicular to the rays of the star. However, since rutile is always present in star rubies, they are never completely transparent. In fact, star ruby is one of those few gemstones which actually require inclusions (i.e. rutile).

Most original sources of star rubies such as Mogok (Burma) have run out of supplies. Worldwide production today is yielding a very small quantity of fine stars (especially in sizes above 5 carats). Star rubies are becoming rare as most rough today is cut into faceted stones after heating instead of being cut into cabochons to display the star.

Traditionally, star rubies were worn by knights in the battlefields to protect themselves from the enemy. Local tales in Karnataka (India) say that if it is worn as a visible pendant or as a headgear then anyone who faces you as an enemy looses half his valour. The power of star ruby is said to be the highest during full moon.

Star Ruby is said to pep up internal strength, ward off tensions, distress the mind and drive away stress related problems like migraine, insomnia, and hysteria. The healing powers of gemstones remain a controversial issue, but are mentioned since ages by healers, shamans and medicine men. Whether it’s a fact or a placebo effect doesn’t matter, if it helps.

The Delong Star Ruby resides in the Natural History Museum in New York City. It weighs 100.32 carats. Discovered in Burma during the early part of the twentieth century, it was sold by Martin Ehrmann to Edith Haggin DeLong, who donated it to the museum. In 1964 the Delong Star Ruby was the object of an infamous burglary, carried out by Jack Murphy, known as Murph the Surf, and two other men. It was then ransomed and recovered. The Delong Star was found at a designated drop off site – a phone booth in Florida.

The Rosser Reeves Ruby is one of the world’s largest and finest star rubies. Weighing 138.7 carats, it is not only clearer and more translucent that the Delong Star, but also possesses a sharp six-rayed star. This Sri Lankan stone is renowned for its great color and well-defined star pattern. Advertising mogul Rosser Reeves, who donated the piece to the Smithsonian in 1965, carried it around as a lucky stone, referring to it as his baby. He often stated that he had acquired the stone at an auction in Istanbul in the mid-1950s. He actually bought the stone from Robert C. Nelson Jr. of New York who was acting on behalf of Firestone & Parson of Boston. Firestone & Parson were selling the stone for Mr. Paul Fisher of New York. Mr. Robert Fisher, Paul’s father, had bought the ruby at an auction in London in 1953. At the time the ruby then weighed just over 140 carats, but was very heavily scratched, and a few carats were removed in the repolishing. The repolishing also helped to center the stone’s star. Articles in the New York World-Telegram and the Sun in 1953 mentioned this fabulous gemstone.

Ruby is the birthstone for July, and the Capricorn zodiac sign. The top quality of ruby is Star Ruby. Ruby is also used to celebrate a couple’s 15th and 40th anniversaries.

What to Look for while buying a Star Ruby:

The value of Star rubies is basically influenced by two things: (a) The strength and sharpness of the star, (b) Intensity and attractiveness of body colour.

Sharpness of the Star: The star should be sharp and silvery / milky white. The best way to test the sharpness of the star is to look at the star ruby in sunlight with the dome facing the sun. All six prongs should be straight and equally prominent. The complete star should be centered in the middle of the gem, but should also be able to glide effortlessly around the cabochon.

Colour of the gemstone: Generally rubies are red. But star ruby is usually not red. Most star rubies are available in pinkish-red, purplish-red or purplish-brown colour. Red Rubies with a perfect star are very very rare and may cost a fortune.

Cutting: Cutting is very important to exhibit the star effect in ruby. They need to be cut into medium to high, domed cabochons to get the perfect star effect. The cabochons must be round or oval-shaped. The stone should not be too flat on the top or too heavy on the bottom. Many bottoms of stars are kept unpolished so that the light is trapped inside the gemstone.

Caring about your star ruby:

Though there are very few chemicals that attack Star Rubies, it is best to clean your star ruby with warm soap water and a toothbrush. Cleaning your Star Ruby in Ultrasonic cleaners is not recommended.

Genuine Star Rubies are usually not heat treated because heating can dissolve the rutile (silk) which causes the star to form in the first place.

Beware of Synthetic (Lab-made) Star Rubies! Synthetic star rubies jump out as way too perfect looking, i.e. a perfect star, a super clean stone, and great color. In natural star rubies the distribution of colour is often uneven, in stripes and spots – which is the best way to judge with the naked eye whether the star ruby is natural or synthetic. However, sometimes it may be a tough task to distinguish between natural and synthetic gems and if you run into any such stone, be sure to ask for a Reputed Gem Laboratory certificate from the seller. No doubt synthetic star rubies are much cheaper than natural ones, but they may offer little or no resale value.

Star Rubies are available in all forms of jewellery. However, Star Ruby Rings and Pendants are usually preferred. To maximize its astrological and healing effects, it is advised that the gemstone should be mounted in jewellery in such a way that the bottom of the stone touches to skin. Star Ruby can also be kept as a loose gemstone. Rubies look best in Yellow Gold Jewellery, though it really depends on the choice of the wearer.

To conclude, if you are looking out for a gemstone, but not sure which one to buy, search no more, get yourself this mystical gem!