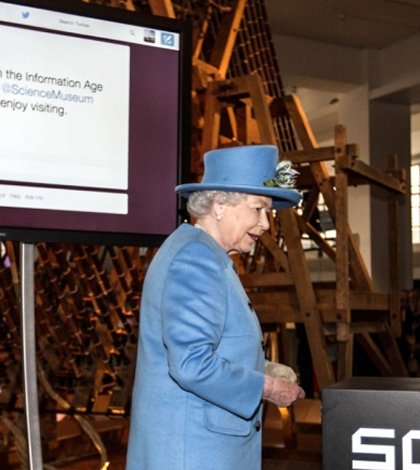 With a tap of a tablet, an 88-year-old woman sent her first Tweet Friday.

Unremarkable in itself perhaps, but this was Queen Elizabeth, who joined the Pope, President Obama and other public figures in directly communicating to the world via Twitter.

The Tweet, sent during a visit to London’s Science Museum, had been pre-written, which means the monarch simply had to press the “Tweet” button on a tablet. It said: “It is a pleasure to open the Information Age exhibition today at the @ScienceMuseum and I hope people will enjoy visiting. Elizabeth R.”

The British Monarchy has had its own Twitter account since 2009, and it is typically used to release formal statements about the royals’ public duties. In 2013, the palace also announced the birth of Prince George via Twitter. This is the first time, though, that the queen has actually sent a Tweet.

So will Queen Elizabeth be making a habit of it? “Watch this space,” a palace source tells PEOPLE with a smile.

While the Monarchy has its own official Twitter feed and another, @ClarenceHouse, is for Prince Charles, Prince William and Kate, and Prince Harry, the only senior royal to Tweet personally is Prince Andrew, who uses the handle @DukeofYork.

His daughters, Princesses Beatrice and Eugenie, also have their own private Twitter feeds.

Samantha Harris Is ‘Elated’ to Be Cancer Free