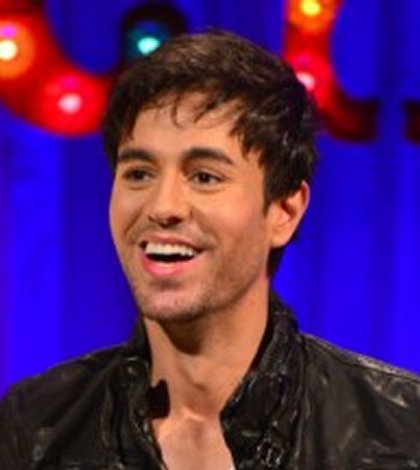 Enrique Iglesias has promised Alan Carr that he’ll get naked in London if Spain win the 2014 World Cup.

Before the last World Cup the 38-year-old singer made a bet that if his native country won, he would water ski naked. And he did.

And Carr got straight to the crux of the matter when they sat down together on tonight’s episode of Chatty Man.

‘I’ll have a bet with you, if Spain wins you have to do a bet and if England wins the World Cup I’ll do a bet.’

Iglesias agreed and Carr suggested he perform an entire gig naked but the pair eventually settled for a naked rendition of Hero.

However, the singer quickly changed his mind…

But the comedian was unimpressed.

‘Do you know what I thought, I was driving here to work today and I was thinking about bets for you, there’s this massive blue c*** on the fourth plinth in Trafalgar Square. If England win the World Cup, I will ride that naked!’ suggested Carr.

‘Why don’t you do something on the other podium, like a lion?’

Prince George’s Royal Tour Packing List? We Have the Inside Scoop