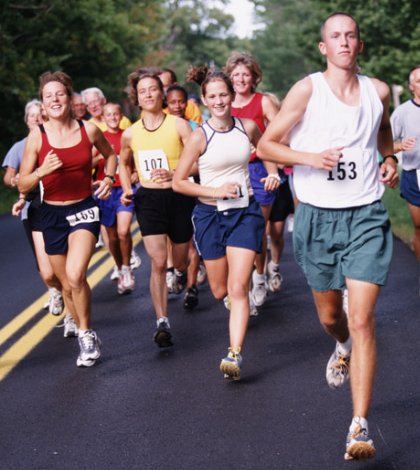 There are several aspects to road racing that must fall into place in order to make the event successful and proper road race etiquette often begins long before the starting gun is fired. In many cases there will be pre-race instructions included in the race package that competitors pick up when they register. It will tell them where to park so the race start area and the course itself will not be clogged with vehicles. There will also be instructions on the proper placement of race numbers and how to attach a timing chip to ensure that it will function properly. When these instructions are not adhered to it makes managing the race much more difficult for race organizers.

Many people have no idea of how to seed themselves properly at a race start. There are often hundreds or even thousands of entries in road races and it’s extremely important for participants to seed themselves at the starting line in direct relation to the time in which they hope to finish the race. For example, if a runner is entered strictly for fun and how fast the finish line is reached is not important, then a starting position far to the back of all the starters would be best. It’s important to keep in mind that some people are there to “race,” and should be seeded in the first three rows. If you stand in front of the fast runners, you will cause tons of traffic problems as soon as the gun goes off. Some races will actually post signs with projected finish times. The idea is to start the race as close to your projected time as possible. If your 10k time will be over 60 minutes, don’t stand under the 40 minute sign.

Once the race begins, it’s important to always be aware of those who are running near you. This includes those who are just in front of you, close beside you, or just behind you. When a corner is approaching it’s important not to cut people off. The runner on the inside has the right of way if you are close together. Either take the corner alongside or fall in behind a runner who has the right of way going into the corner. It’s very easy to get your feet tangled up with another runner and ofter serious falls are the result if care is not taken in the corners.

Often there are people who are running the whole race together and insist on talking loudly through-out the entire race. this is extremely disconcerting and rude and most other runners are not interested in hearing your entire life history. Talking is great, but it’s considerate to keep it to a minimum. This also means not striking up a conversation with another runner who is obviously not interested and is trying to concentrate on breathing and putting one foot in front of the other.

If there is an irresistible urge to spit-and often there is-be sure there are no runners directly behind you or beside you.

Once the finish line is crossed, keep in mind there will be other runners coming in right behind you. Keep moving forward and follow the instructions of the race organizers at the finish line. They will want you to remain in order so when the finish tag is removed from your race-number, you will be properly placed in the race.

What Makes a Student Athlete?