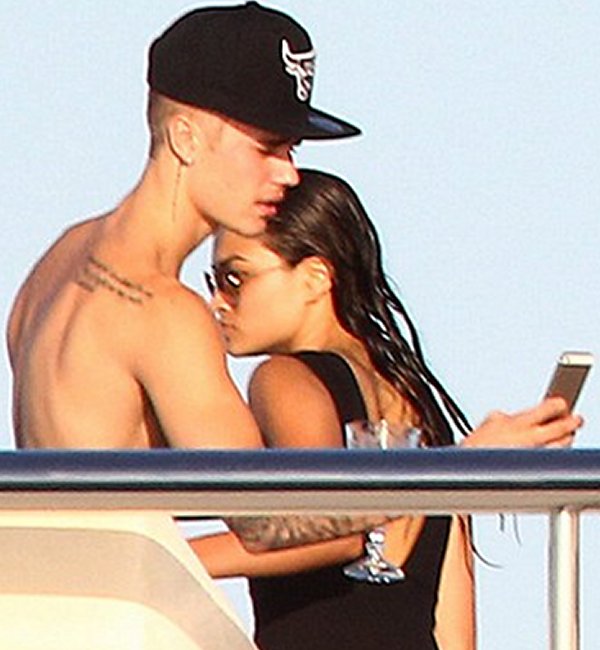 Just hours after he was involved in a bust-up over Orlando Bloom’s estranged wife Miranda Kerr, Justin Bieber was seen partying with another Victoria’s Secret model – Australian beauty Shanina Shaik.

The stunning 23-year-old beauty was spotted alongside the famed bad boy aboard a luxury private yacht in Ibiza on Wednesday.

Dressed in a dangerously low-cut one piece that showcased every inch of her 5ft 6in frame, the brunette beauty looked relaxed as she soaked up the sun on deck with the Bieber.

Slicking her long locks back, she wore minimal makeup and covered up behind a pair of tinted aviators as she mingled with fun-loving actress Michelle Rodriguez, who was also on board.

Not content with lazing about catching rays, Justin, 20, was spotted taking to the waves on a jet-ski as a DJ provided entertainment for his guests.

Shanina is no doubt an aquaintance of Miranda’s if not a friend – the pair walked the Victoria’s Secret catwalk together in 2012 – the same year Justin performed on stage at he show.

She credits her the fellow Aussie model with helping her calm her nerves when she first took to the catwalk for the underwear giant.

In an interview with The Cut in 2011 she said she had bought Miranda’s book Treasure Yourself and revealed she got some good advice from Miranda at rehearsals: ‘My heart was beating – boom, boom, boom.

The luxurious cruise comes the day after Justin almost came to blows with Orlando Bloom, after reportedly telling him to ‘Say hi to Miranda for me!’ when they ran into each other in an Ibiza restaurant.

Justin was reported to have got ‘very close’ to the model at an after-party at a New York hotel following the Victoria’s Secret show in 2012, while she was still married to Bloom.

Shanina also starred in the 2012 fashion show, and spoke about meeting a very gentlemanly Justin.

At the time she wrote in a Vogue diary from the show: ‘Justin Bieber even gave me a kiss on the hand.’

Justin and Orlando’s late-night incident, which happened in the early hours of Wednesday morning, took place at the Cipriani restaurant on the Spanish Island of Ibiza, which was packed with celebs, including Paris Hilton, and Diddy.

Justin’s security team promptly pulled the two apart before the incident spilled over into the street, with the singer reportedly calling the British star a ‘b**ch.’

Clearly trying to irritate the situation further, Justin then posted a picture of Miranda in a bikini with a symbol of a crown as a caption.

Representatives for Bloom and Bieber have refused to comment on the matter.

Miranda, the woman at the centre of the scandal, has also remained tipped lipped but the 31-year-old apparently tried to turn her back on her ex-husband’s antics as she posted a picture of herself with their three-year-old son Flynn – swiftly followed by a provocative shot of her topless in the bath from her new campaign for 7 For All Mankind Jeans.

An onlooker told MailOnline: ‘As Justin walked off he made the jibe at Orlando, which was only going to make him more angry.’

Footage, obtained exclusively by MailOnline, captured the moment Orlando threw a single punch at him when they met by chance at the eatery.

The incident was recorded by onlookers as Justin crossed paths with the Pirates of the Caribbean star shortly after entering the venue with his entourage.

Shanina shot to fame in 2008 after placing second on reality show Make Me A Supermodel.

It was during her time on the show that she met model Tyson Beckford, 43, and the pair began dating soon after.

They dated on and off for four years before ending their relationship last November.

In May rumours of a romance with Cleveland Browns star Julian Posey, 25, emerged after the pair shared cute couple social media snaps

‘It’s only early days but she’s happily dating Julian,’ a rep for Shaik told the Daily Mail Australia at the time.

However when the Aussie beauty appeared on Channel Nine’s Today Show earlier this month, she said she was back on the market.

The Australian stunner and face of Just Jeans was discussing the latest denim trends when host Karl Stefanovic asked her if she had a boyfriend.

‘I love a boyfriend jean right now because it’s really casual and you can go from a day to night kind of thing with a great pair of heels, depending on how you feel,’ she said.
‘Do you have a boyfriend… jean?’ asked a cheeky Stefanovic.

‘No. I have a boyfriend jean, yes, but I don’t have the first part.
‘I’m single right now.’