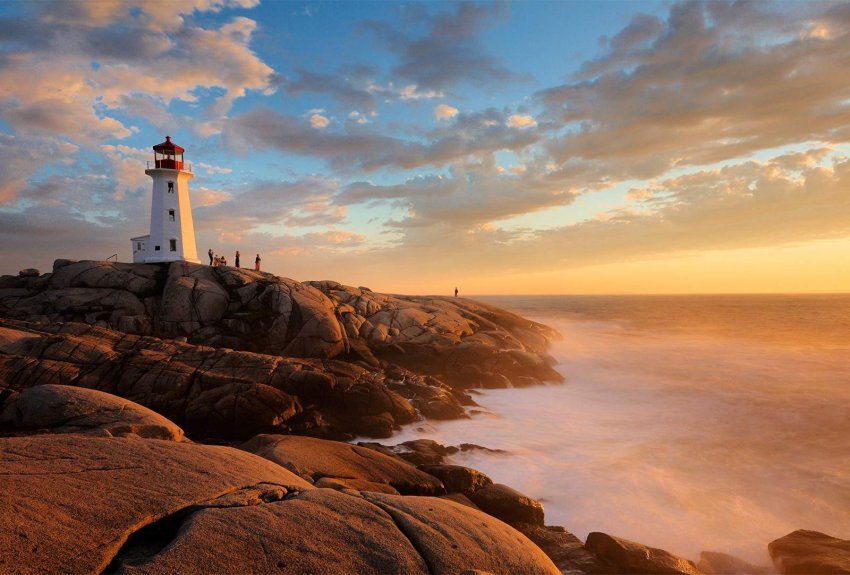 Usually there’s only one legitimate way to make so difficult a choice: flipping a coin. Heads — you take a cruise along the eastern seaboard, visiting New England’s charming fishing villages rife with colonial pride and fresh lobster. Tails — you set sail for Alaska, storming up the west coast to discover the awe-inspiring beauty of nature. You flip the coin, and as the shiny silver disc spins, your travel agent snatches it in mid air and says, “Not so fast. You’ll find the best of both worlds by cruising Canada’s eastern shores.”

Beautiful and Ideal for Cruising

From the sea, the north Atlantic coast of Canada’s Maritime Provinces appear unapproachable. The coastlines are dramatic, the islands pristine and wild. The colors, unbelievable in the autumn light, are unforgettable all year long. Yet unapproachable these provinces are not, as the scenic seaside towns welcome cruise ships with open arms and Canadian affability.

These are the coastal cities of legends, an adventurous cruise traveler’s dream come true. You can spot playful beluga whales in New Brunswick’s Fundy Bay, navigate across the world’s second largest harbor in Nova Scotia, experience the remote beauty of the Saguenay Fjord and glide down the historic St. Lawrence, where lighthouses stand guard over fishing villages that hide urban surprises rich with culture.

Travel agents love to send clients here to remind them just how beautiful North America can be. Not only in late summer and autumn, when the changing seasons transform the coast into a dazzling work of natural art, but also during the summer, when the historic seaports are hopping with activities. Many cruise ships with five-to 10-day itineraries depart from the east coast throughout the year, so it’s easy to come aboard and experience Canada’s remarkable ports.

From whichever U.S. city you set sail, you’ll enjoy the slow, scenic drift up the coast past Maine and into the Bay of Fundy to find Saint John, New Brunswick, a bustling city with the look of a inviting village. Canada’s oldest city, Saint John has welcomed settlers from England, Ireland and Eastern Europe for centuries, and each group has added a unique ingredient to the area’s eclectic culture.

One of Saint John’s main attractions is the Reversing Falls Rapids. There, Mother Nature puts on an aquatic magic show twice a day where the Saint John River meets the Bay of Fundy. The Bay is famous for its strong tides, the most extreme in the world, and twice daily the tides rise to their peak and overcome the river, forcing it to retreat and causing the rapids to reverse their direction.

Your cruise ship will reverse directions and steam out of the Bay of Fundy and along the beautiful coast of Nova Scotia to your next port of call, Halifax. Officially known as “Canada’s Ocean Playground,” Halifax is a hilly seaport town sitting pretty on the world’s second largest natural harbor after Sydney, Australia (not to be confused with Sydney, Nova Scotia, another popular cruise destination on Cape Breton Island).

The large harbor creates miles and miles of incredible coastline, prompting many happy travelers to list Halifax as one of the most beautiful capital cities in the world. Renowned for its buskers (street performers), bagpipes, foghorns, salty seafood and boisterous pubs, this seaport paradise perfectly blends big city excitement, small town charm and the unspoiled beauty of nature.

Leaving Halifax and sailing north across the Cabot Strait, you’ll soon become entranced by the irresistible draw of Newfoundland and its historic capital city of St. John’s, the easternmost point on the continent. This modern, youthful city has drawn seafarers for centuries to its deep harbor. The harbor, which is protected from the open seas by stony hills and accessible only through a pinched gap called The Narrows, appears to many as a peaceful lake, and it reflects the city’s Victorian houses in its tranquil waters.

Back across the Cabot Strait and into the Gulf of St. Lawrence, your ship will port on PEI — Prince Edward Island — where the “island way of life” is as sweet as it sounds. PEI is all about relaxing, and when your disembark in Charlottetown you’ll have many chances to do just that in the pocket parks that dot the city or by watching the seals play in the harbor.

The best way to relax before the trip is to have your travel agent handle all the details. Worldly travelers with worldly experiences, travel agents can help you find the perfect ship with the best itinerary to fulfill your Canadian cruise dreams. They also can advise on exciting side adventures, like exploring the sheer mountains walls of the Saguenay Fjord off the St. Lawrence River, where some cruise ships sail en route to Quebec City and Montréal.

Start planning your cruise to Canada’s eastern shores. Embark on an adventure, and disembark in Canada’s incredible seaports.

Places You Must Visit While in Vietnam