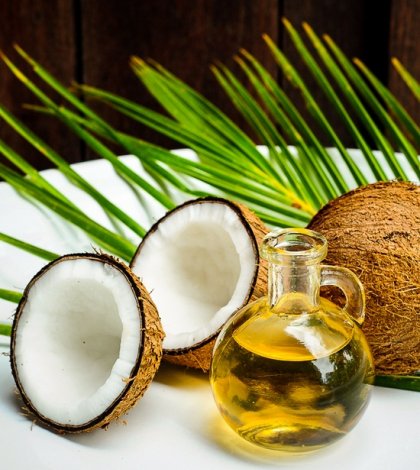 Absorption may vary depending on a number of issues, including skin texture and thickness. When you apply coconut oil, be sure not to apply too much in any one spot. This may leave coconut oil sitting on the surface of the skin, where it can be more easily rubbed off onto something that it could ultimately stain.

Instead, apply only as much as your body will readily absorb and understand that a little bit goes a long way.

Pure coconut oil naturally contains a nice list of powerful nutrients for your skin. These nutrients include: lauric acid, myristic acid, capric acid, caprylic acid and caproic acid, all of which are medium chain fatty acids.

Once absorbed into the skin, these nutrients provide a fairly long list of benefits.

But even before being absorbed, a benefit can already be claimed. This initial value is based on the fact that when you apply it to your skin, it creates an excellent protective barrier. A barrier so helpful, in fact, that as it is reported to help nourish the skin as it simultaneously works to defend it against bacterial, fungal and viral invaders.

This becomes important when you realize that each time you bath, shower or wash with soap and water, you are scrubbing to remove the protective barrier that is naturally produced by your body for your skin.

The cosmetic industry’s response to this issue, has been to flood the market with a wide range of expensive products that tout fewer benefits than those coconut oil provides. Often skin barrier products even promote single benefits, such as being anti-fungal, inflammation protecting or just plain old moisturizing.

The body, however, provides a much different solution to this issue. It uses the sebaceous glands to produce medium chain fatty acids. According to Wikipedia, “The sebaceous glands are microscopic exocrine glands in the skin that secrete an oily or waxy matter, called sebum, to lubricate and waterproof the skin and hair of mammals. In humans, they are found in the greatest number on the face and scalp, and are also found on all parts of the skin except the palms of the hands and soles of the feet.” (1) This oil is known to help prevent dry and cracking skin by providing moisturizing elements. It is also known to help defend the body against microbial invaders. Because of this, it is often recognized as one of the body’s first lines of defense.

In addition to being found on the skin for body defense, medium chain fatty acids are found in mother’s milk, for the same reason. They help nourish and protect babies. As we all know, consuming mother’s milk plays a critical role in helping the healthy development of an infant’s immune system.

One of the characteristics that makes coconut oil quite unique, while at the same time similar to mother’s milk and sebum, is that it naturally contains a large amount medium chain fatty acids, as mentioned above. According to a study published by the University of Minnesota in March 2005, “About 60% of the fatty acids in coconut oil are 12 carbon atoms or shorter, whereas corn, soy and canola have almost no short or medium chain fatty acids.” (2)

Quite simply, coconut oil is not like other oils and the body is also affected by it differently.

As well, virgin coconut oil can be applied to skin that is red, sore or inflammed and it has shown scientific benefits when this is done. This includes skin that has sustained virtually any injury or wound, ranging from a simple sunburn or insect bite to issues much more severe.

And now, for several of the reasons just mentioned, you may also want to apply coconut oil to your feet. The feet are a common source of heavily dry and cracked skin. The feet are also susceptable to common fungal attacks, often referred to as “Althete’s Foot”.

But don’t stop there, while you are applying it to your feet, work your way up your body to other common areas of dry skin, like the knees, hands and elbows.

Also, don’t be afraid to apply it to your neck and face. Acne outbreaks may become less problematic and less noticeable. The skin may even brighten up with a healthy new glow.

It is believed that coconut oil is not capable of clogging skin pores, in part due to its high lauric acid and capric acid content. One study, from 2009, even reported that lauric acid provides “stronger antimicrobial properties than that of benzoyl peroxide (BPO)”. (3)

As a food, coconut oil is loaded with a specific type of saturated fat, known as a medium chain triglyceride or MCT. Research also demonstrates that MCT’s are much easier for the body to use than other saturated fats that people eat in other oils (like canola and olive oil). In fact, promising research also exists connecting the consumption of coconut oil to weight loss.

But, for the best beauty results, applying it to the skin’s surface provides greater beauty benefits than those gained by eating it. That being said, you may want to do both.

Hopefully by now, it is obvious that you should put coconut oil, everywhere you have skin (all over your body).

Depending on the severity of the issue, you may need to apply it consistently for some time, before seeing the results you want. Feel free to apply it daily. You may even find it helpful to apply it two or three times daily.

When you begin applying coconut oil to your skin, remember to spend a few extra seconds working it into your skin. Give your skin a chance to soak in the goodness.

And clearly, there should be no doubt about the goodness, because an interesting study was published in 2010, by the U.S. National Library of Medicine and National Institute of Health. It was titled “Effect of Topical Application of Virgin Coconut Oil (VCO) on Skin Components and Antioxidant Status… “. This study concluded that “the beneficial effect of Virgin Coconut Oil (VCO) can be attributed to the cumulative effect of various biologically active minor components present in it.” (4)

How to find a perfect solution for wedding hairstyles?