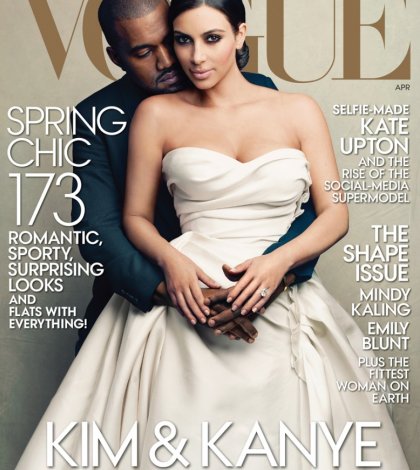 After months of speculation, Kim Kardashian has finally landed her first Vogue cover. And she’s not alone. The reality star joins fiancé Kanye West for the magazine’s April issue shot by Annie Leibovitz.

Kardashian, 33, wears a gorgeous strapless Lanvin gown and poses with West’s arms wrapped around her for the shot. The rapper looks ready to head down the aisle as well in a navy suit. The coverline? #worldsmosttalkedaboutcouple, which is hard to argue with considering the duo’s whirlwind relationship and presence in the fashion world.

North, 9 months, also joins her stylish parents for the shoot (as seen in the behind-the-scenes clip below) set to West’s “Bound 2″ hit.

“Annie and Grace Coddington [Vogue Creative Director] we’re so impressed with how professional Kim was,” an industry insider tells PEOPLE. “They all laughed throughout the shoot and had so much fun.

And the bride-to-be definitely got some serious wedding dress inspiration for her upcoming nuptials. “Kim tried tons of wedding gowns made for her by every designer,” the insider says. (Basically, it sounds like she had a Carrie Bradshaw Sex and the City moment. Remember that scene from the first movie?)

The new mom made sure to take in every moment of the love-filled family experience. “Kim is so grateful and loved shooting this with Kanye and North,” a Kardashian source adds.

She also shared her excitement with fans. “This is such a dream come true!!! Thank you @VogueMagazine for this cover! O M GGGGGG!!! I can’t even breath!” Kardashian captioned the cover photo Instagram.

Last year Kim landed the cover of CR Fashion Book posing for a dramatic spread shot by Chanel designer (and fashion Kaiser) Karl Lagerfeld and directed by Givenchy mastermind Riccardo Tisci. West has collaborated for French ready-to-wear line A.P.C. for a number of collections. And now the couple has this photo to frame.