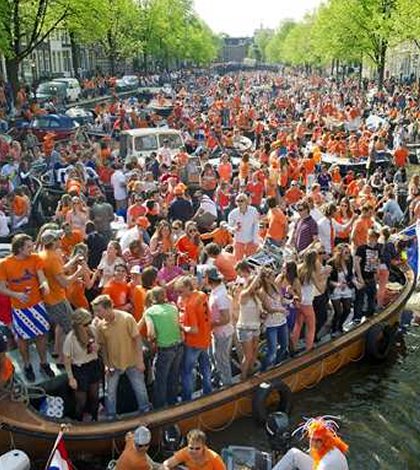 Amsterdam’s biggest street festival/carnival is called King’s Day (formerly known as Queen’s Day). This year it will be observed on 26th April, 2014. It means that you still have a few days to book your Amsterdam packages from India, though you better hurry up to lock the best packages at the cheapest prices.

King’s Day is a festival whose roots can be traced back to the late 19th century. It started off as a royal celebration to mark the gaiety surrounding the birth of Queen Wilhelmina. Now, over the decades, the festival has become more of a public holiday with each person trying to make the most of this event.

What you can expect on this day is to get drowned in a sea of orange color. Almost everyone is going to get out on the streets dressed in bright orange. And by everyone, we do mean everyone! So, if you bump into a dog or a pet cat draped in gaudy orange, do not raise your brows! Orange is the official color of Netherlands and you too are expected to clad yourself in something orange (the brighter the better, the more the merrier)!

Face-painting is another activity which is pursued with a vengeance. Artists use the opportunity to paint the public’s face with fiery orange colors, just the way you get to see here in India during cricket matches. Orange is the dominating color even on canals and highways. The boats are decked up in this flame color and processions are held, giving everybody a peek of the real Amsterdam! So, it goes without saying that a boat ride over the canals is a must-do thing on this day.

Apart from the tsunami of orange, you can expect some heart-thumping live music. The streets turn into a disco as everybody breaks into an impromptu gig and DJ’s set the roads roaring with their foot-tapping numbers. The mood is light and the foods not to be missed. More than anything, it is the live wire ambiance which is the highlight of the event.

It is also the best time to soak in all the colors of Amsterdam nightlife. For the shopaholics, the time is the most opportune for digging their claws into souvenirs and other local products. On this day, the city witnesses one of the largest flea markets in the world. Bargaining and haggling become an addictive ritual but one thing is sure- no matter what price you pay, the experience will only make you richer!