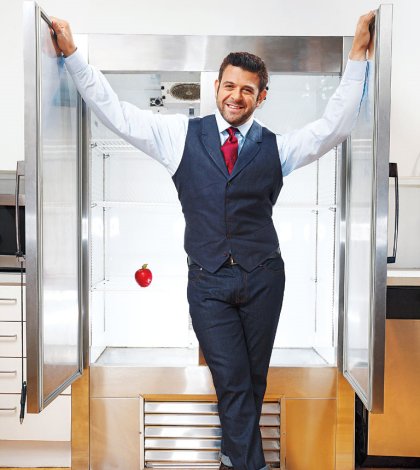 So it’s understandable that on a recent road trip, the TV host found resisting one slice to be a tough challenge.

“The crew got a bunch of pizzas, and it was all I could smell,” he says. “It sucked. But I had a Greek yogurt with raw almonds, water and an iced coffee, and I was satisfied.”

The same stomach-of-steel star who found fame by taking on gluttonous food challenges such as an 8-lb. platter of steak and fries covered in mushroom sauce and cheese (he lost that one because of meat sweats) is now retired from extreme eating – and 60 lbs. lighter.

Richman, 39, dropped the weight from his 6-ft. frame by cutting down on white flour and dairy and amping up his exercise routine.

Not that he resents his old job for enabling his old figure. “Man v. Food was the biggest career-defining opportunity. I went from anonymity to someone of note with access to amazing eateries,” he says.

Demi Moore: Is She Dating Her Ex’s Father?