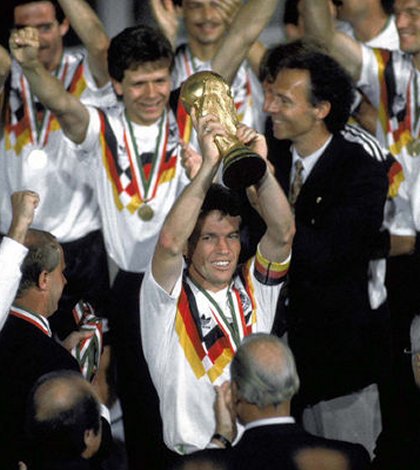 FULLTIME: Argentina 0 Germany 1 –And that’s it! Germany have won the World Cup for the first time since unification and no one can deny that they have been the best team at this tournament. The Germans players huddle in jubilation and Mario Goetze will now go down in history as a World Cup final goal-scoring hero. Stayed tuned for video, reaction and plenty more as we wrap up a World Cup to remember. Bye for now. 122mins: Argentina 0 Germany 1 –Schweinsteiger brings down Messi and he has a chance from about 35 yards out to equalise but it sails over as the reality of being a losing finalist kicks in. Oh dear.

106mins: Argentina 0 Germany 0 –And the second half is now underway. One moment of brilliance will decide this. Who is it going to be? Messi, Mueller? Someone? Please?

105mins: Argentina 0 Germany 0 –And yes we have reached halftime of extra time. We are now just 15 minutes away from a penalty shootout. But maybe there is a winner? Stay tuned.

96mins: Argentina 0 Germany 0 – Rojo delivers a delicious chip ball over the top for Rodrigio Palacio but he can’t control it and his shot goes wide.

93mins: Argentina 0 Germany 0 – Aguero breaks down the wing but his tantalising cross goes in front of the face of goal and out for a goal kick.

91mins: Argentina 0 Germany 0 – And extra time is underway and we’re praying for a winning goal and Schurrle very nearly gets it as he smashes the ball but the quick reflexes of Sergio Romero saves Argentina for now.

END OF NORMAL TIME: Argentina 0 Germany 0 –For the third time in a row the World Cup final goes into extra time. Who is going to be Andres Iniesta this time? Stay tuned. One goal should decide it.

91mins: Argentina 0 Germany 0 –Mario Goetze makes an instant impact and fires a shot but it goes straight to Sergio Romero.

88mins: Argentina 0 Germany 0 –Enzo Perez is replaced by Fernando Gaga as legs become wary. And the record setting Miroslav Klose is replaced by Mario Goetze. Klose is given a warm ovation as he signs off from World Cup football for the last time.

84mins: Argentina 0 Germany 0 –Messi is probing and he delivers a nice through ball into the zone of Aguero but the City strike slips over. Almost sums up his World Cup.

81mins: Argentina 0 Germany 0 –Close for Germany. Ozil delivers a sumptuous centre ball to Toni Kroos on the edge of the box but his effort just goes wide. Extra time here we come?

77mins: Argentina 0 Germany 0 –Gonzalo Higuain is subbed for Rodrigio Palacio. Higuain could have scored the winner but it wasn’t to be.

73mins: Argentina 0 Germany 0 –Messi dribbles around the perimeter of the box and curls a shot but can’t get the inswing he needs to test Neuer. The second half has become cagey as the prospect of extra time becomes a firm possibility.

71mins: Argentina 0 Germany 0 –The dangerous Schurrle breaks through but he can’t control the ball and shot dribbles lamely to Sergio Romero.

46mins: Argentina 0 Germany 0-  Another heart in mouth moment with a powerful header from Benedikt Hoewedes smashing into the post. The ball rebounds for Mueller but he is offside and his limp shot is saved by Sergio Romero anyway.

44mins: Argentina 0 Germany 0–  Mueller sends a dangerous cross into the box but again it just too high for the despairing Miroslav Klose.

40mins: Argentina 0 Germany 0 –  Messi makes another dangerous run into the box and a little dinky pass has Neuer scrambling but Germany get out of jail again.

37mins: Argentina 0 Germany 0 – And Schurrle makes an instant impact! Mueller setting him up and the Chelsea man smashing a shot that requires a smart save from Sergio Romero.

31mins: Argentina 0 Germany 0-Meanwhile the drama continues with the late replacement Christoph Kramer forced to go off with a knock to the head. He will be replaced by AndréSchurrle.. So Ozil will play more centrally now.

25mins: Argentina 0 Germany0 -And the girlfriend of Germany’s Sami Khedira, Lena Gercke, was all smiles before the final (see photo to right) but she and the rest of Germany will be devastated that he can’t play in the final after picking up a thigh injury. Still respect for the back-to-front Germany shirt she is flaunting.. That’s gangster.

21mins: Argentina 0 Germany 0– Oh no! Gonzalo Higuain is given a gift by Toni Kroos but the Argentina striker puts his shot wide after being put in a one-on-one situation with Manuel Neuer. Kroos breathes a sigh of relief.. We”l bring you video of that chance ASAP.

10mins: Argentina 0 Germany 0-That man Messi makes a breath-taking run down the right hand flank and burns Mats Hummels with ease but his cross is incepted by Schweinsteiger. Still nice signs for Argentina.. Shortly after a Pablo Zabaleta cross goes agonisingly across the face of goal. Expectation building.

4mins: Argentina 0 Germany 0-Marcos Rojo brings down Thomas Mueller in an attractive position but Bastian Schweinsteiger’s shot innocently hits the wall. Then on the break Gonzalo Higuain shoots across the face of goal.. Far from a cagey start

1mins: Argentina 0 Germany 0-And we’re underway! Should we expect a feeling out period intially? We think so… 6:57am – Late injury news Christoph Kramer has come into the Germany starting XV after Sami Khedira picked up a calf injury in warm-up. That’s a big blow for Germany.. Khedira was almost the best player in the semi-final. 6:43am – Di Maria not starting In late team news.. Angel Di Maria will not start for Argentina after struggling with a thigh injury.

Di Maria also missed the semifinal win over the Netherlands, and the speedy winger’s absence is a big blow for Argentina’s attack.

Germany starts with the same lineup that beat Brazil 7-1 in the semifinals after center back Mats Hummels was declared fit despite a minor knee problem.

Lionel Messi spearheads Argentina’s attack alongside Gonzalo Higuain, with Sergio Aguero on the bench. Aguero has also struggled with a thigh injury. Argentina also stayed with the same lineup that started in the semifinals.

6:35am – Queuing for Miles There is extraordinary scenes of fans queuing up to get into fanzone at Copacabana beach in Rio.. It honestly stretches hundreds of metres and we’ll bring you video of that ASAP.

Well it’s all come down this. After 170 goals, 63 matches, 37 days, 10 red cards, eight goals in the most extraordinary World Cup match ever, four penalty shootouts and one bite, we are now just hours away from witnessing a new world champion.

Today we will provide extensive commentary, video of the goals, photos of the colour and if you want.. you can even watch a live stream of the whole match.. just click on the live stream at the top of this story (sorry it’s for New Zealand viewers only).

The best player in the world goes up against the ultimate team machine, on the world’s biggest stage.

Argentina captain Lionel Messi is already destined to be remembered as one of the greats but if he wants to join Pele and Maradona in the most exclusive of clubs, he will need to lead his nation to their first world title since 1986.

Although his goals have dried up in the knockout stages, Messi’s famous left boot was on song in the group stage and the odds are that he will break his three-match scoring drought in the final.

But this game will be about much more than that.

Argentina has shown that it can play just as tactically as the Germans, eking out narrow victories and doing whatever is needed to win. Germany, meanwhile, has put on two of the most explosive displays of the tournament – beating Portugal 4-0 in its opening game and then demolishing host Brazil 7-1 in the semifinals.

Add in the rich history between these two teams – who faced each other in two straight World Cup finals in 1986 and 1990, winning one each – and it’s anyone’s guess who will come out on top at the Maracana Stadium.

Here is a look at how the two finalists compare:

Manuel Neuer’s reputation as one of the best goalkeepers in the world has only grown in Brazil, where he has been one of Germany’s best players throughout the tournament, especially in the knockout rounds. Aside from being a first-class shot stopper, the Bayern Munich goalkeeper showed his versatility by repeatedly rushing out to help the defense in the second-round win over Algeria. He then made key saves to deny Karim Benzema an equalizer for France in the quarterfinals, and a number of impressive stops against Brazil.

Sergio Romero has answered most sceptics who questioned whether he was good enough to play for a top team in a World Cup. Romero was only a backup for his club Monaco this past season, but came through big in the penalty shootout against the Netherlands with two saves to send his team into the final. He has kept three straight clean sheets in the knockout rounds, but will face his greatest challenge yet against the clinical Germans.

Germany’s defence has improved vastly since coach Joachim Loew took captain Philip Lahm out of midfield and put him back in his favored position as right back after an erratic display against Algeria in the second round. Mats Hummels has been a steady anchor in central defense, and Germany had little trouble neutralizing the explosive attacks of both France and Brazil. Whether they can deal with Messi is another matter.

Argentina’s defence was seen as its main weakness going into the World Cup, but the team has now gone 330 minutes without conceding a goal in the knockout rounds – including two extra time periods. The back four, which includes Manchester City duo Pablo Zabaleta and Martin Demichelis, made Dutch strikers Arjen Robben and Robin van Persie look plain ordinary.

This is Germany’s biggest strength, a unit without weakness that plays together as a well-oiled machine. Bastian Schweinsteiger and Sami Khedira shore things up defensively while Toni Kroos and Mesut Ozil direct most of the attacks going forward. Germany’s ruthless display against Brazil was orchestrated by the clinical efficiency of its midfield, and a similar display today might just be too much for Argentina to handle as well.

The Argentines, meanwhile, are hoping that Angel Di Maria will recover from a thigh injury to play in the final. Di Maria’s pace and ability to take on defenders on the wing was sorely missed against the Netherlands, when his team struggled to find ways forward. Defensive midfielder Javier Mascherano was one of the best players on the pitch against the Netherlands and is the key to keeping Germany in check.

Germany has the highest-scoring player in World Cup history in Miroslav Klose. But Argentina has Messi, and two other top forwards to boot. While Messi hasn’t scored in the three knockout games, his four goals in the group stage reminded everyone of why he’s a four-time world player of the year. Even with Sergio Aguero and Gonzalo Higuain in the team, Messi has always been the key to Argentina’s success – and never more so than in the biggest game of his career. For Argentina to have a chance, Messi will have to create goals – either for himself or for his teammates.

Transform the Way Your Body Looks, Feels and Performs Through Pilates