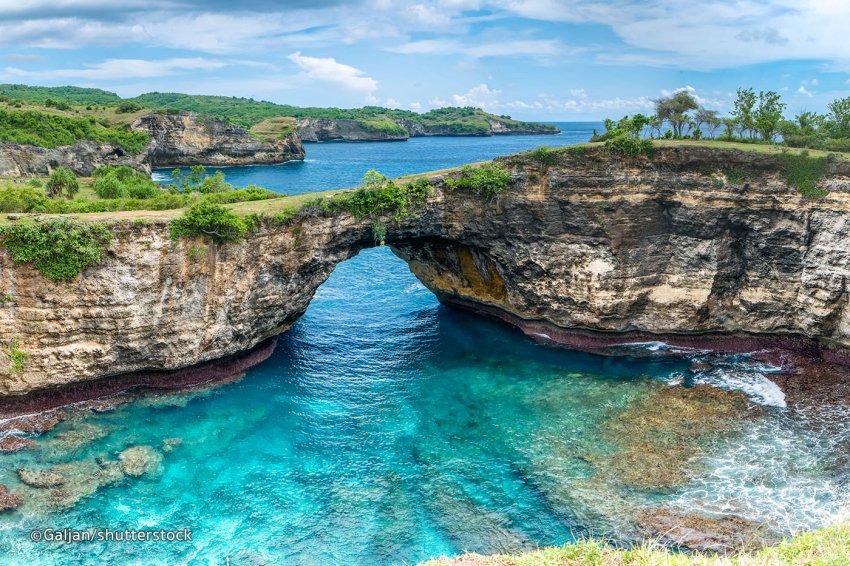 Bali is a small mountainous island of 5.600 km2 lying in the same arc as the other islands of the Sunda archipelago. It is situated between the eastern end of Java and the island of Lombok. By sea, communication are possible with Java by the Gilimanuk ferry at Bali`s western tip, where 60 percent of the passenger traffic and 40 percent of the goods are handled; with Lombok via the small natural port of Padangbaai; with the rest of Indonesia at Buleleng on the north coast, which is so shallow that boats have to find moorings two to three cable`s lengths, out to sea, and with the rests of the world through the artificial port of Benoa on the south coast. By air, Bali`s main transport node is the modern international airport at Tabanan on the stem of the southern peninsula. It was built between 1963 and 1969. And Renovation in 2012-2013. It accommodates all the traffic of the domestic and international airlines flying into Bali.

The island lies in the equatorial zone with the 8th parallel south running along its longer diameter. This is position means day length and the annual temperature mean of about 23 C do not vary greatly, but it does affect the climate by an alternation of dry and rainy seasons. The westerly monsoon blows from October to April and this is the overall wet season. The easterly monsoon is dry, save for the south coast which keeps receiving some rain between July and November when the districts of Buleleng on the north coast and Karangasem to the east endure dry seasons which up to the whole of the austral winter.

This ridge, an alpine fold, divides Bali into a narrow northern zone and a wide southern zone. On average, the ridge is not much more than 1,000m high but several more recent volcanoes, two of which are still, Mt Batur (1,717m) and Mt Agung (3,274m) rise well above the ridge. On the whole, as dry and barren chalk spread around the island on the north-west, the east and the south coasts with, specially in the south, the Bukit peninsula and the island of Penida off the coast of Klunkung.

This base has experienced uplift and fracturing in the centre and, from the quaternary volcanoes, ash and other clastic material has been deposited in deep layers of tuff over most of the south. The best land is found in the intermediate zone where ample rainfall and fluvial activity have brought the volcanic material as sediments, as is the case on the northern inland sections of the districts of Tabanan, badung, and Gianyar, with their typically dense stream network oriented from north to south. The worst land lies around and south of Mt Agung in Karangasem where recent lava and ash render the area useless. The eruption of 1963 is vividly remembered.

It will be understood then that the overall density of 337 inhabitants per sq.km cannot depict the really of the population density of Bali, unless it is compared with that of only 40 years ago – 318, or with density of Indonesia. The least densely populated of Bali`s eight districts, Jimbaran has just over 400 persons /km2. Another, Gianyar has nearly 1450, and Badung which includes the subdistrict of Denpasar with its 3,172 / km2, has over 2400 / km2. Emigration to other Indonesian islands, whether spontaneous or with Government assistance, has only removed a small fraction of the population and family-planning is still only in the early stages of implementation.

Adventurer’s Guide To Enjoying Egypt: Things To Add To Your Bucket List

Cruising From Venice to Mantua – Highlights of the Region