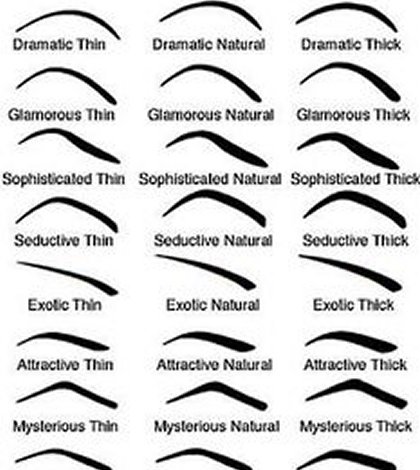 Eyebrow trends may come and go, but there’s always the dreaded eyebrow look that becomes a definite don’t. Here are the top 5 brow shapes NOT to do, that you may want to avoid the next time you pick up your tweezers.

Most commonly called, “the happy eyebrow”, it borders on an almost 1/2 circle shape. This happens when the tweezer keeps trying to create more of an arch, but is not sure where the arch is. So they keep tweezing from underneath the eyebrow in the wrong place, creating a 1/2 circle. The round eyebrow has replaced the ‘tadpole’ eyebrow (thick in front, which goes to an immediate thin arch and end of the brow) as the current most seen brow mishap.

FIX: Create your arch only at the outside corner of your iris. Then tweeze a straight line from the beginning of the brow to the arch, to create a stronger, more dramatic arch to the brow without having to tweeze so much.

2. THE ARCH IN THE WRONG PLACE

Or, in most cases, the arch is too far outside the eye. This happens when the arch is created by a pencil lining up to the side of the nose to the outside iris of the eye. What happens is that the eyes actually end up looking crossed eyed (especially in photos) and too close together. Having an arch placed too far out creates the illusion that the eye is actually closer to the nose than it really is. So sadly, this does not create a ‘wide’ eyed appearance as most think it does. Instead, you get the actual opposite, eyes that look far too close together.

You really can’t do a cookie cutter approach to shaping eyebrows. Why? Because everyone’s bone structure and eye shape is different, and your eyebrow shape really has to do with the bone that’s underneath the brow. That determines the eyebrow look and shape that are uniquely yours.

FIX: Rely on stencils to create a perfect eyebrow look with shadows and pencils, but do not use it as a guide to tweezing.

Skincare Tips for “All Skin Types”