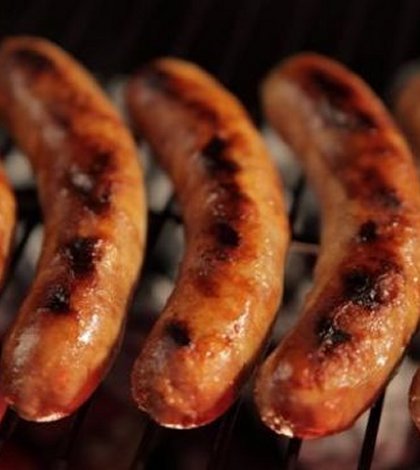 As long as the internal temperature of the pork reaches 160 degrees Fahrenheit, pork sausage can be baked or broiled. The type, shape and usage of the sausage determine which method works the best. For example, sausage patties do well with broiling, but thick sausage links would probably burn before the inside is cooked through.

Baking Tips
Baking doesn’t require the constant watching that grilling does. Set the links or patties in a roasting pan. Bake at 400 F for to 60 minutes. Exactly how long depends on the thickness of the patty or the diameter of the link. Small links cook faster than large links. Make a one pan dinner by placing the links or patties on top of a bed of vegetables such as sliced potatoes, sweet potatoes, carrots or cabbage. The drippings flavor the vegetables as the patties cook.

Broiling Tactics
Broiling gives the sausages a deep brown color. Prick the sausages with a fork so they don’t split while cooking. The broiler pan has perforations in the top pan to let the fat and juices drip away from the pork. Broil 10 to 16 minutes turning the sausage over so all sides are nicely browned. If the sausages are browning too fast, lower the rack away from the broiler. Check with an instant-read thermometer. Return to the broiler if the pork hasn’t reached 160 F. Create pork sausage kabobs by alternating chunks of the sausages with green pepper and onion chunks. Leave about 1/4 inch between the vegetables and sausage.

Baked and Broiled
Use both the broiler and the oven. Give the pork sausages a brown crust from the broiler and cook them all the way through in the oven. When the patties are just about done, turn off the oven and turn on the broiler. Drain any grease from the bottom of the pan. Place the pan on the highest rack closest to the broiler and broil until both sides are crusty.

Parboil Before Broiling
Broiling is the next best thing to grilling pork sausages, but the larger sausages made from pork such as bratwurst burn on the outside before the inside is cooked. The solution is parboiling the sausages until they’re done. Bring a pot of water — you could use beer or even wine if you like — to a boil. Slide in the sausages and lower the heat so the liquid simmers. If the sausages are in natural casings, the casing could break if you boil the sausages. Your lovely sausages become one with the liquid. Broil a few minutes until the sausages are browned.

Other Methods of Cooking
Pan sauteing gives the pork sausages a crisp crust that almost snaps when you bite into it. Saute over medium heat, turning the sausages so all sides are brown. Another alternative is slow cooking either in a Dutch oven or in a slow-cooker. Try the sausages with cabbage, potatoes and carrots. Spicy pork sausages such as chorizo flavor a pot of greens such as kale, collard or chard. Serve over rice to capture every drop of the liquid.

How To Use Whiskey Balls To Improve Your Cocktails