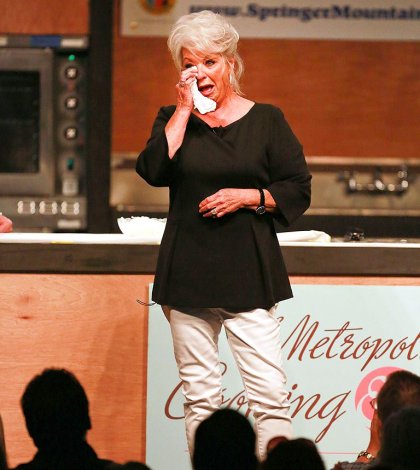 Paula Deen has found something to feel good about after a pretty terrible summer.

The Southern chef, 66, broke down in tears after receiving thunderous applause during a 10-minute standing ovation at the Metro Cooking & Entertaining show in Houston on Saturday.

“These are tears of joy, y’all,” she said. “This is my first time out in three months. … The one place I wanted to make my first step out was in Texas. You are forgiving folks with hearts as big as your state.”

“We all experience pain in some way but pain is also a good thing because it makes you grow,” Deen added before joining sons Bobby and Jamie for a cooking demo.

After her emotional outburst on Saturday, Deen quickly got back in touch with her sassy side. Near the end of her demo, she walked up to a cameraman, put her face up close to his camera and said with a giant smile, “I’m back!”

The controversy surrounding Deen began when the TV chef and her brother, Bubba Hiers, were sued for racial discrimination and sexual harassment by former employee Lisa Jackson.

When a transcript of a deposition – in which Deen admitted she had used the N-word in the past – was released in June, it swiftly ignited a firestorm.

The Food Network fired Deen and she lost many lucrative endorsement deals, including Smithfield Hams, Target and Walmart.

Ballantine Books also canceled a five-book deal and stopped publication of her October cookbook, despite the fact that the book had already hit No. 1 on the Amazon bestseller list.

Last month, a judge threw out the racial discrimination portion of the suit and soon after the Southern chef and Jackson reached a settlement to dismiss the remaining claims in the lawsuit.