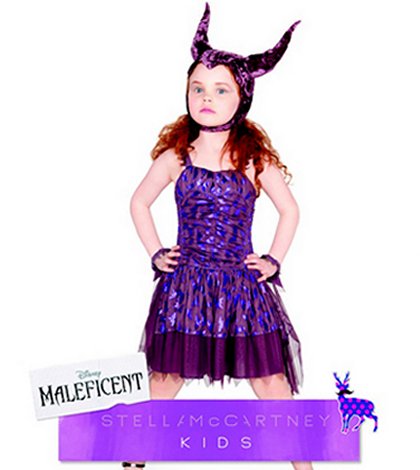 We thought we were excited when the Maleficent trailer was released.

But consider us ecstatic after finding out that Disney, Stella McCartney and Angelina Jolie (of course!) collaborated on a kids costume collection inspired by the film, which hits theaters on May 30.

Aptly named after the movie, it will include eight styles including sparkly princess dresses (we’re loving the purple number to the left), bow-adorned sandals, dragon-print tees and cool sneakers for boys and girls aged 4 to 14.

“I’ve always been a huge fan of Disney growing up, as was my mother, and I grew up watching all the films like most kids did,” McCartney told WWD.

“When the opportunity presented itself and I was invited by Angelina Jolie to visit the film set, I jumped at the chance.”

We’re sure glad she did. If it’s anything like the jewelry line McCartney designed for Tim Burton‘s Alice in Wonderland in 2010, then we’re already hooked.

Starting at the end of April, you’ll be able to buy the capsule collection, which will range from $75 to $145, at Stella McCartney Kids stores worldwide, as well as Disney stores and online.

We bet Jolie’s youngest daughter will be a fan. Vivienne, 5, plays a young Aurora in the movie.