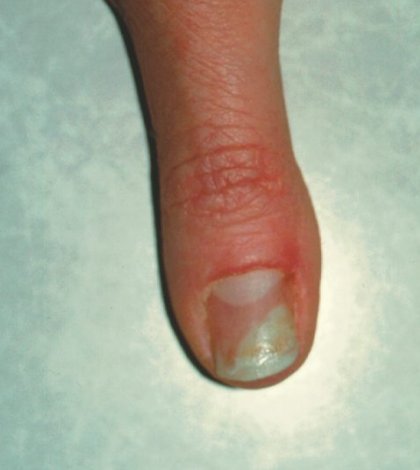 Onychomycosis, also commonly known as nail fungus, is a condition many people experience. It affects both toenails and fingernails, and varies in mild to severe symptoms that are caused by imbalanced internal pH levels and bad hygiene. Because fungus thrives in dark, moist environments, it will continue to grow on toenails until preventative action is taken. Severe cases of the conditions typically require lengthy treatment with prescription topical or oral medications, but mild cases may respond to home treatments.

Vinegar
Vinegar helps treat toenail fungus by changing the pH of the skin. It requires an alkaline environment, and vinegar alters the skin’s pH to make it more acidic and less habitable to fungus. To treat it with vinegar, soak the affected foot in equal parts water and vinegar for 30 minutes, one to three times per day. Vinegar also has antiseptic properties. You can also apply undiluted vinegar directly to the affected nail using a cotton ball.

Topical Medications
Two topical antifungal medications are commonly available to treat people with fungal nail infections. One is called Amorolfine and is applied to the affected nail like nail polish once a week. A person with onychomycosis repeats application of the medication until the portion of the nail that is infected grows out. Toenails usually grow out in nine to 12 months and fingernails usually grow out in six months. The second topical agent is called Ciclopirox or Penlac. Ciclopirox decreases fungal nutrients, inhibiting growth. It is also a lacquer, applied like nail polish, and is applied every day. Ciclopirox is used for 12 months.

Prevention
After successful onychomycosis treatment, it is important to take preventive measures against a recurring infection. A person can protect toenails by wearing moisture-resistant socks and shoes and avoiding going barefoot in public places. Hands should be washed regularly and gloves should be used when doing dishes or performing housework. In addition, it is essential to keep nails trimmed and clean to lessen the chances of a new infection.