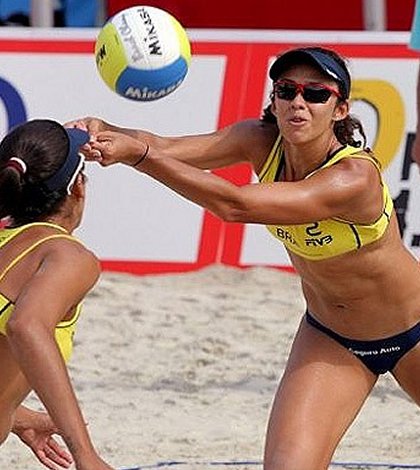 There are only two general kinds of volleyball – indoor volleyball and outdoor or beach volleyball. The two differ not just in terms of location. They may share a few similarities like the use of rally point system in scoring and the required 2-point edge to declare a win, but the differences are far more than the similarities.

Another difference apart from the size is that there is, in indoor volleyball, a parallel attack line drawn 3 meters away from the center line. Back row players must be careful to stay behind this line when hitting the ball. In contrast, there is no attack line in outdoor volleyball and players can hit the ball from just about anywhere.

Indoor volleyball is heavier and usually made of leather. A heavy ball moves quicker and can be hit much harder, something that suits indoor volleyball. Beach volleyball, on the other hand, is larger, softer and lighter, allowing it to float in the air and requiring the players to use the weather to move the ball.

There are 6 players on each side in indoor volleyball. Each player is a specialist in a certain position but must take part in active rotations and complex switches.

Outdoor volleyball is different in that it is played by doubles. Also, there are no specialized positions apart from the right and left sides. Beach volleyball players are good, all-around players that are able to hit, dig and block. However, at the higher levels of outdoor volleyball, one player usually specializes in digging and the other on blocking.

An indoor volleyball match consists of 5 games or sets. The first team to score 25 points wins the set. Three won sets enable a team to win the match. A fifth tie-breaker set may be necessary but this last set is played out only up to 15 points.

In outdoor volleyball, a match is made up of a best-of-3 game series. Each of the 3 games is played to 21 points. Two won sets enable a team to win the match. The third tie-breaker game is played only up to 15 points.

Indoor volleyball uniforms have evolved from the traditional baggy clothing to more formal jersey tops and trousers. Beach volleyball uniforms, on the other hand, have been labeled as too revealing and immodest by certain cultures and religions. The controversy led to the decision of the International Volleyball Federation in 2012 to allow sleeved tops and cropped shorts instead of the usual 2-piece bikini.

Tim A Barth
Related Topics:Fitness & Sports
Up Next

What a Basketball Player Should Eat

Nature And Adventure – The Perfect Combination In White Water Rafting