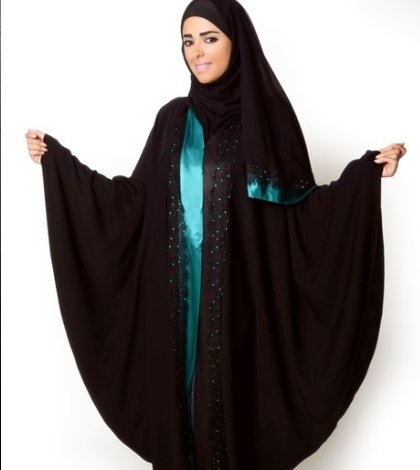 Abaya is a kind of hijab worn by Muslim women all over the Islamic world. It is a loose cloak usually made of fine black fabric. This robe like dress is also called ‘aba’. Abaya conceals the whole body of a woman except for the face, hands and feet. It’s a two piece garment consisting of a large square piece of cloth shaped into a loose robe and a head gear with niqab. Abaya is the national dress in the UAE and women all over Arabian Gulf, Turkey and North Africa wear it. The Indonesian and Malaysian Muslim women call it Kebaya.

Abaya is worn for the purpose of purdah that is to cover women and to conceal their beauty from men who are not related to them by blood or marriage. All Muslim women must keep themselves covered in public. Other than its religious importance, an abaya has some cultural and traditional significance too. Women feel protected and secure while wearing it as the Quran said: “They will thus be recognized and no harm will come to them.” Differences in the abaya head gears in the UAE also help distinguish the younger women from the older ones and the local Muslim women from expatriates. Hence an abaya imparts certain identity to women.

Modern styles in abaya offer diversity which helps women choose lavishly for their daily gear. They can pick and choose from a tremendous variety of styles, colours, shapes and cuts. Saudi Abaya is considered more popular amongst the many styles that are available, With time an abaya has evolved from its initial plain cut and colour into a symbol of style and fashion among Muslim women. A wide range of fabric, from fine crepe and chiffon to georgette and cotton are in use for this garment. An abaya no longer needs to be just plain black in colour. It can be made in any colour, however, extremely attractive and colourful abayas are prohibited in Riyadh. The choice of colour and fabric for an abaya may vary depending upon the region and culture a woman belongs to.

Modern abayas with embroidered edges, fascinating motifs at the front and the back, can easily lure women into making expensive purchases. Bands of glittering diamantes, glistening stones, shining ribbons and lace embellishments on black or colourful fabric impart style and elegance to this religious and traditional mode of dressing. If we compare Saudi women to expatriates they are more willing to invest extensively in custom-made abayas as they want to follow the latest trends. Another popular modern trend is an abaya shaped like caftan. Old traditional Egyptian “milaya laf” of 1920s has also inspired modern abaya designers.

A large majority of women like embroidery designs on large butterfly and fish silhouettes. These are usually done in bright catchy colours and impressively detailed fine beads work. Satin and silk has also been used for making abayas unique and stylish. A combination of net sleeves with satin has given many women an elegant chic look. Such stylish abayas sometimes look more like Kaftan dresses. Many women prefer wearing patterned or printed head scarves with their robes which often makes them stand out among others. The ‘Kum Seeni’ styled abaya which is done in ‘Chinese-arm style’ has also been a favourite among women. Styles in an abaya vary according to the occasion too. A party-wear abaya is supposed to be done in bright colours or heavy embroidery, diamantes or beads work. While a routine wear will be comparatively simple but elegantly cut.

An abaya is symbolic of a Muslim woman’s unique identity. It supports her religious beliefs with dignity and style, and this imparts a distinctive importance to this garment.

A Woman’s Guide To Shapewear