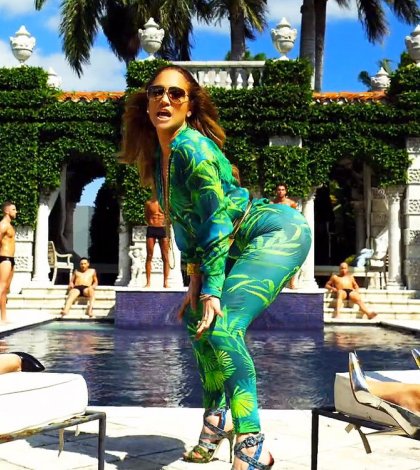 ennifer Lopez has hit us with a #throwback like no other. On Thursday night, the American Idol judge released the music video for her “I-know-you-want-me” urban pop track “I Luh Ya Papi,” in which she brings us the 2014 version of her famous ultra-plunging Versace gown from the 2000 Grammys — a crazy low-cut jumpsuit with the same wild jungle print!

“We didn’t really even plan that,” Lopez tells PEOPLE. “The stylist just brought it on the rack and I saw it and was like, ‘What’s the jungle print doing there?’ So it just kind of worked out.”

The video shows the 44-year-old in various outfits that are reminiscent of some of her most iconic fashion moments whilst being surrounded by scantily clad men. “We decided to flip the script,” Lopez says. “We were asking ourselves, ‘Why do the guys always have the fun?’ This video is for the girls!”

Apart from that green plunging neckline, you will also see Lopez in a white outfit on a yacht that looks a lot like the cover of her On the 6 album from 1999, short shorts and all. But instead of being a play thing for the boys, her role is a new one. “Why do men always objectify the women?” says one of her back up dancers at the beginning of the video (watch below) in which they foresee what their idea for flipping the script will look like. “Why can’t we for once objectify the men?”

Though it looks effortless on all parts, working with male models as opposed to dancers proved to be a challenge for Lopez’s choreographer beau Casper Smart, who was responsible for directing all their moves. “I mean they’re beautiful,” says Lopez of the male models she was flanked with in the video. “Lying there, it was genius! But when they had to get up and be like, ‘I luh you,’ it was like, ‘OKAY guys maybe one more take.’ This was the closest I would ever do to a rap video. It was a lot of fun.”

It definitely looks like a lot of fun, but the mom of 6-year-old twins will be the first to admit that it’s hard work bringing on the sexy. “It’s the other job to the job! But it is what it is, you gotta buckle down,” says the pop star. As for how she maintains her sexy figure (her body in the video is insane!), it’s plain and simple: “You gotta work out and watch what you eat.”

Matt Damon Teaches His Daughters to Give Back

Were the Kardashian Home Burglaries an Inside Job?