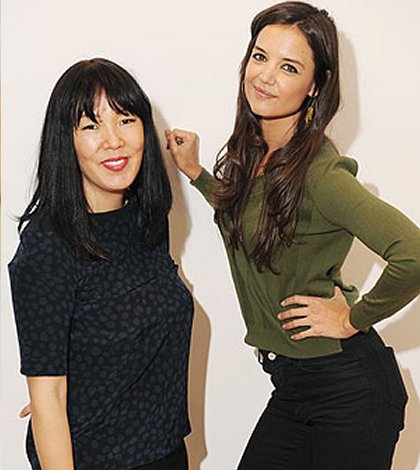 Many fashionistas were surprised to hear of the sudden demise of Holmes & Yang, Katie Holmes’s five-year-old clothing line with her stylist Jeanne Yang. Despite the line’s increasingly high profile, landing high-fashion spreads and and a spot at New York Fashion Week, the split had apparently been a long time coming.

At the time, insiders speculated about the reason Holmes and Yang ended their partnership, but the two key players were staying silent. Now, Holmes has spoken to Elle UK about the split. “I loved every minute of my time working on Holmes & Yang. I remain passionate about the design aesthetic we created, and am so happy with what Jeanne and I accomplished,” she said. “However I am now concentrating on acting and motherhood, which did not leave the label the time and attention it deserved. I’m really thrilled that the final showcase for Holmes & Yang is in Elle — I had a blast at my shoot for the magazine. It is fantastic to feel like it’s ending on a high.”

Yang declined to comment to PEOPLE, but last week, a source shared some insight with us. “They have different approaches to absolutely everything: how to run the company, how to promote it and how to handle the press,” the source said. “The conflict isn’t about any one thing, it’s sort of about everything.”

Obama shop for his Girls at Gap store