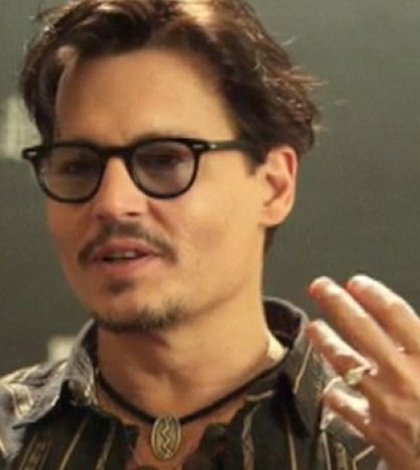 Johnny Depp made an appearance in Beijing to promote his film Transcendence wearing his usual assortment of jewelry, with one very notable new addition. The star was wearing what seemed to be a woman’s engagement ring on his left ring finger — a fact confirmed by the star himself.

According to the AP, when asked whether he and Amber Heard are officially engaged (the two have been mum on the subject, letting her ring speak for itself), Depp said, “The fact that I’m wearing a chick’s ring on my finger is probably a dead giveaway. Not very subtle.”

And in these photos, it appears that it’s not just any chick’s ring — it seems to be the same one Heard has been wearing for a few months now. Both rings featured a similarly-sized round diamond, featuring intricate scrollwork on the band and a slightly raised setting.

Now that we’ve done our up-close comparisons, we have a number of questions, like: If it is Heard’s ring, what is she wearing right now? Did they just get matching engagement rings? Are mangagement rings going to become a trend now that Depp has worn one?