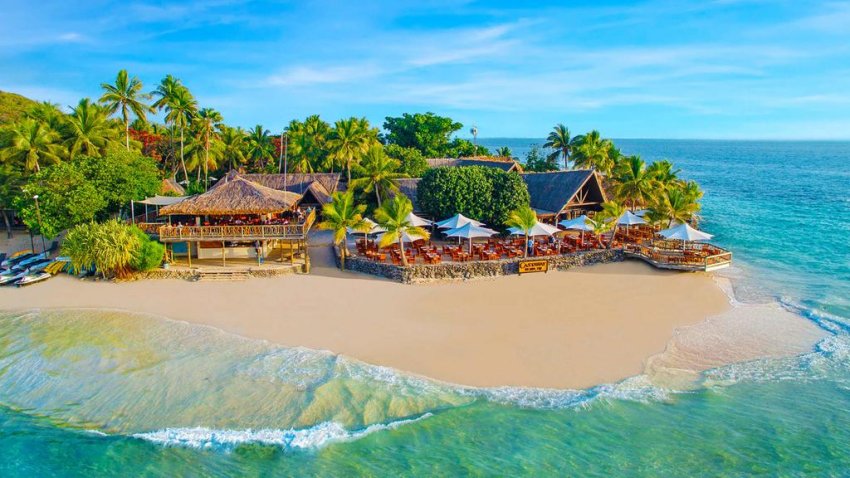 If you think that Fiji is strictly for honeymooners, read on: Solo travelers are heading to Fiji for scuba diving and an array of options for an active vacation. If you survive “swimming with sharks”, intrepid solo travelers can always rappel down thirty feet next to a waterfall and then swim in a completely dark cave!

The earliest known contact with Europeans was with the Dutch in 1643. They were followed by British explorer Captain James Cook a century later. He became a permanent part of Pacific Island history when his name was given to the “nearby” Cook Islands, a popular vacation spot in the 21st century especially for New Zealanders. (When I visited them some time ago, the planes used for inter-island flights were so small that each passenger had to be weighed before taking off from Rarotonga on a 6 seater flight to Aitutaki!)

Fiji’s history includes a visit by the Mutiny on the Bounty’s Captain Bligh in 1789 while the French Revolution was occupying much attention on the opposite side of the world. The next century saw the arrival of missionaries primarily from Europe as well as numerous new residents from India.

Fiji’s diverse population has resulted in a warm and welcoming community that greets visitors with “Bula”, wishing them health and happiness. If Fiji looks familiar to you upon arrival, you may have “seen” it through the eyes of Hollywood in films such as “Castaway” with Tom Hanks or older classics with leading stars like Douglas Fairbanks, Senior.

Although getting there requires a long flight unless you live in Australia or New Zealand, it is well worth it. Inbound formalities are minimal. Most countries’ passport holders are automatically granted a four month visa upon arrival with proof of a passport valid for six months. Tourists can also obtain a refund of certain VAT taxes paid.

With the competing allure of so many other Pacific Island like Hawaii and Tahiti, what is special about Fiji, and why should single travelers go there?

Unlike the famed Hawaiian Islands, Fiji is comprised of an archipelago of more than 300 islands. Only about one-third are inhabited. This surely appeals to most travelers’ curiosity or maybe even the secret desire to claim an uninhabited island as their own?

Fiji’s sites for scuba diving and snorkeling are world-class with a reef only surpassed by Australia’s and New Caledonia’s barrier reefs. Known as Cakaulevu, it boasts at least one endangered species.

Beyond multiple world-class dive sites, rare Heliopora or blue corral can be found in Fiji at Rotuma.

Fiji has marine life such as species of turtles that date back more than 100 million years.

For fish aficionados, the islands can claim one fish that grows as tall as a man, the Napoleon Wrasse, which can reach 6 feet in length.

Colorful wildlife is abundant, including endangered species, like the curiously named “Monkey-faced Bat”.

Tourists can visit certain of the uninhabited islands. However, some are less uninhabited than others. One such “uninhabited” island, Yanuca Lailai/Lost Island, does have at least one tourist resort.

Commuting between islands is via boat or small airplanes; however, international flights arrive in Suva, Fiji’s capital, on the island of Viti Levu. Tourists quickly flock to its top beach at Natadola while white water enthusiasts can also find rafting nearby. Beyond pristine beaches, Beqa Island, just one hour away from Viti Levu, provides a chance to see traditional firewalking.

There are multiple other options for those traveling alone:

Yasawa Island’s Sawa-I-lau Caves are a major tourist site. It is possible to swim in a sunlit cave one moment and the next to be swimming in a neighboring cave in complete darkness. While still in the Yasawa Islands, you can swim with sharks or manta rays depending upon your sense of adventure.

From there, it is time for even more adventures: parasailing on Denaura Island, rappelling 300 feet into the Tau Caves or ziplining high above the towering palm trees.

If you are still yearning for more, you can try a unique sport known as “Zorbing”. If you have ever chased a ball downhill, you know it seems the faster you run, the faster it picks up speed. In Zorbing, you don’t have to run after the ball because you are inside it racing down the hill!

Whether you are a beachcomber at heart or an insatiable adventurer, Fiji is a tropical paradise for everyone, including solo travelers. Dust off your passport, and get ready to travel!

Top Most Things to See and Do in the United Kingdom

Stunning attractions for people in the UK