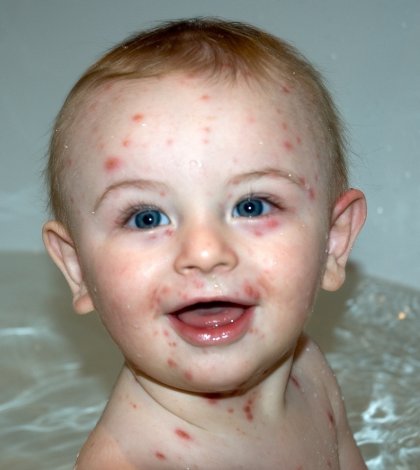 Chickenpox which is scientifically known as varicella is a common condition that causes red spots, blisters and an itchy rash all over the victim’s body. Normally children get this illness and is bound to happen to almost everyone at least once in their lifetime although there are vaccines to protect yourself from getting the illness.

Chicken pox is known to cause problems in the everyday life of the patients especially newborns, teens, pregnant women and adults who are working. It may also cause more severe problems for people who have immune system disorders.

The condition is not a very serious illness as it doesn’t cause much health problems although a child who faces chicken pox will have to stay home rather than go to school which might cause you to miss work to care for your child. It is more of a cause and effect problem therefore it’s best to be prepared for chicken pox.

Once a person experiences chicken pox it is very unlikely for it to happen again, although there are cases when it happens again. Chickenpox is caused by a virus called varicella-zoster and can spread easily to other people. The spread of the illness could be through coughs, sneezes or sharing of food or drinks. Touching of the blister of chickenpox is also known to spread the illness therefore you must be careful when taking care of a person who has the condition.

Chickenpox can spread from the person without the person even feeling the symptoms and therefore it could be dangerous. It can mostly spread most easily 2 to 3 days before the rash appears.

The symptoms of chickenpox are not that serious and are often started with a headache, a fever and/or a sore throat. The patient will start to feel sick, tired, and will feel a loss of appetite. Chickenpox rashes start to appear after a day or two after the first symptoms start showing. Some people don’t experience any symptoms and get the rash right away too.

It takes about fourteen to sixteen days for the symptoms of chickenpox to appear after you have been around a person who got the chickenpox. This period is called incubation period. It usually takes around a day to two for the red spot to go through all the stages which includes blistering, bursting, drying and crusting over. New spots of red will appear almost every day for the next five to seven days and the process will continue.

Once all the blistering has crusted over, it is then okay for you to go out again, this is mostly about ten days after you first experienced chickenpox. There are many medications that help and are needed during taking care of the blisters some which may include Zovirax, acivir, herpex and many more.

How to Deal With Chronic Diarrhea