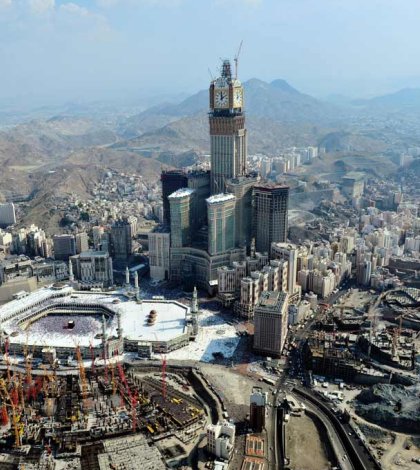 There are many tallest building in Saudi Arabia some of them are mentioned below showing its height in meters, number of floors and the year in which built.

This is one of the tallest building in Saudi Arabia with a complex structure comprising of 120 floors, 601 m tall and built in the year 2012. It caters pilgrims from all over the world to visit the holy city of Mecca and perform their Hajj and religious rituals. The building contains world’s largest lock mounted on it and is also known to be the largest clock tower in the world.

Along with Clock tower hotel there are some other towers connected beside that are, ZamZam tower which is also situated in Mecca with 265 meters height and is consisted of 54 floors, built in the year 2012. Takeem Tower in Mecca 265 meters high, containing 58 floors in it and built in the year 2012. Marwah and Dhahran Towers, 225 and 200 meters high respectively both situated in Mecca.

It is second tallest building in Riyadh having 99 floors, 302.2 m tall and build in the year 2002. It is known to be third tallest building in the world having hole on the face. It has shopping mall, the Four seasonal Hotel Riyadh and some apartments in it. The Area of the building where it is actually situated is around 100,000 meters square with a considerable area of parking that can manage 3,000 vehicles at a time.

The Al Faislaiah Center is the business skyscraper in the city Riyadh, which is the third tallest building in Saudi Arabia. It is 267 m tall having 30 floors and situated in the year 2000. The building is structured in a manner that it has a ball designed along with it, which is a luxurious restaurant and just down of the ball there is an awesome view. It also contains a shopping center at the last floor where you could find world’s best brands available.  The corners of the building are actually beams joining the golden ball and up to the top to make it a sharp edge. The building is taking the form of ballpoint and was designed considering its design.

Apart from this there are some future projects of buildings which are in under construction and are expected to be completed in 2014, 2015 and 2019. Among all, the world’s tallest building is also going to be built in Saudi Arabia which will feature the height of 1,007 meters, 186 floors and is expected to be completed in 2019. These various buildings in Saudi Arabia are being used for residential, official and commercial purposes.

The Sights of Sicily – Villas, Temples, Castles and Other Must-See Ruins