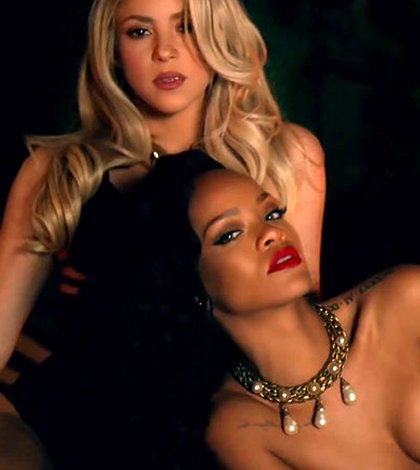 Shakira isn’t always the one in charge.

The Voice coach admits that she lets her boyfriend, soccer player Gerard Pique, make some big decisions when it comes to her work.

Take, for example, her raunchy video with Rihanna for “Can’t Remember to Forget,” which features the pair stroking each other while smoking cigars.

The 37-year-old admits she asked for Pique’s permission to do it. “He’s very territorial,” she reveals in the new issue of Billboard magazine. “Since he no longer lets me do videos with men, well, I have to do them with women.”

The mom of one reveals that Pique’s also the reason why she won’t be playing the video vixen with shirtless men in her videos anytime soon.

“It’s more than implied in our relationship that I can’t do videos like I used to. It’s out of the question, which I like, by the way,” she says. “I like that he protects his turf and he values me, in a way that the only person that he would ever let graze my thigh would be Rihanna.”

“I was so nervous. You have no idea,” she says of dabbling in country music and asking Shelton to sing with her. “I was so scared he was going to say, ‘No, Shakira. I love you, but no.'”

But as to whether she’ll get a pass from Pique to shoot the video with him, she’s not saying. Maybe it’ll be okay if Shelton keeps his shirt on …

If Jennifer Aniston Could Have Any Famous Person’s Body, Who Would It Be?