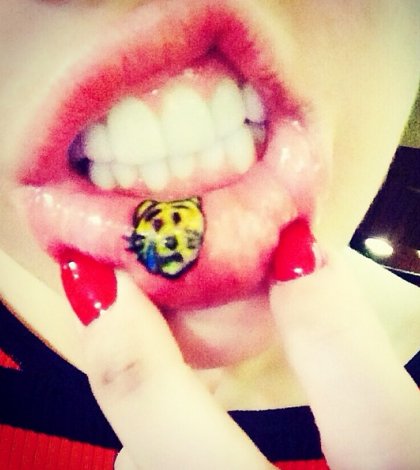 Miley Cyrus posted a pic on Instagram of what appears to be her latest ink – an emoji of a sad kitty on the inside of her lower lip.

While the singer isn’t saying whether it’s the real deal, her friend Katy Weaver posted a pic in which she and Cyrus both showed off their lower lips along with the caption, “We got tattoos on our lips… What the f–––”

Another sign? Cyrus, 21, also posted a Twitpic a little earlier in the day showing her in the bathtub with a washcloth covering her face. “My life right now,” she wrote. “#OUCHYBOOBOO”

Cyrus has about 20 tattoos including a large dreamcatcher, a portrait of her grandmother, the words “Just breathe,” quotes from Teddy Roosevelt and a peace sign, heart and cross on her fingers.

“People get tattoos of the most f––––d up s–––,” she told Rolling Stone last September after getting the magazine’s name tattooed on the soles of her feet.

Cyrus isn’t saying why she chose to get sad kitty on her lip, but when asked on Friday by Cosmopolitan magazine what her favorite emoji was, she’d said a tongue, “obvi.” Maybe the idea of getting a tattoo of a tongue on her lip was too much for the “Wrecking Ball” singer.

We can’t wait to see what cat-lover (and Miley Cyrus tongue hater) Katy Perry has to say about this.

David Brenner Dies of Cancer at 78

Jessica Alba Jokes: I Wish Honor Would Dress Her Age