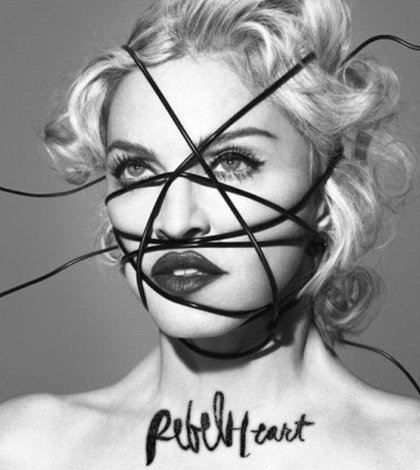 The Internet took notice on Friday when Madonna posted a series of doctored images of Martin Luther King Jr., Nelson Mandela and Bob Marley on Facebook, Instagram and Twitter to promote her new album, Rebel Heart.

In a statement released late Friday night, Madonna apologized for the photos, saying she didn’t mean any harm.

“I’m sorry,” she wrote in a Facebook post. “I’m not comparing myself to anyone. I’m admiring and acknowledging there (sic) Rebel Hearts.”

She also defended the posts, saying, “This is niether (sic) a crime or an insult or racist!”

The singer, who has been at the center of many controversial moves in the past, ignited a fury when she compared her “#rebelheart” to theirs by transposing the artwork from her album – which features her face crossed with black cord – onto their faces.

Thousands of Facebook, Instagram and Twitter followers blasted Madonna for using the civil rights icons to promote her album, saying everything from “highly disrespectful” to “WTF” and “poor taste.”

But, she says, it wasn’t all her fault. “I didn’t do it. My fans did. And I just re posted those photos. My fans aren’t racist either. If they put me in the same category as these other people, thank you.  I’m very flattered and I hope one day to live up to 1/100th of what those people accomplished.”

She also pointed out that she also posted pictures of Michael Jackson and Marilyn Monroe with the same black cord around their faces. “Am I saying I am them? NO. I’m saying they are Rebel Hearts too.”

The uproar hasn’t stopped Madonna from posting new pictures of other “#rebelheart” icons. On Saturday, she posted a picture of Princess Diana on her Facebook and Instagram pages, saying, “Yes Princess Diana was. #rebelheart! Anyone who fights for freedom is a #rebelheart.”