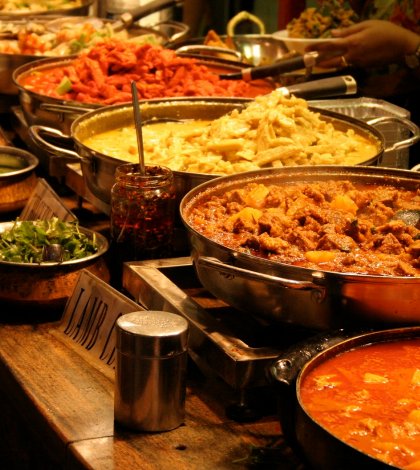 Indian cuisine is itself a melting pot on its own, which is into the process of bringing in recipes and techniques from all regions of the country. In fact you’ll be stunned to know that the regional cuisine is incredibly varied and mostly depends on what spices and herbs are available locally. But even though that is the case, some of the staple Indian food is always on the table.

In fact it is the rich and varied cuisine of this country that brings us to India without the call for a passport. Their recipes are full of color, texture and aroma. The simple and the straight forward instructions simple enough to understand is capable of creating some complex levels of flavors that your family would love to eat!

However the uniqueness of Indian cuisine lies in its spices and flavors. Have you ever tasted the typical Indian dish “Tandoori Chicken”, this is a dish which can simple make your mouth watering. This dish has many things and a range of spices mixed in it. This dish consists of elements like, lemon juice, yogurt, clove, garlic, onion, cilantro and many more. Just by having a glimpse of the above spices you can make sure that like the country Indian cuisine is the one that has varied taste and flavors. Being rich in culture this cuisine can make you taste the most wonderful recipes of the world and thus include in its richness.

It is a fact that Indians do take their meals very seriously and are always interested to innovate with their recipes and want to make something new out of any ingredients that you give them. In fact cooking food is a tradition that is being passed down through families and is given from mother to their daughter before they get married. They even make innovation with their spices and fuse them abruptly to innovate something new and thus make the dish flourish.

Among the many spices the most commonly used ones are the following: • Cumin • Fennel • Turmeric • Garam Masala • Cinnamon Sticks

These are the most common ones that are quite frequently used almost in every second dish. There is another wrong myth that everyone has formulated for Indian cuisine. Many people think that Indian food or to be more specific Indian curries are always very spicy and are prepared with too much uses of spices. However this is not true since a very famous Indian cuisine from Bengal has launched itself as the most simple and healthy dish. Named as “Sukto” a preparation of mixed vegetables is prepared in a very simple and straightforward manner.

Hence it can be said that Indian cuisine is the most diversified and has the most varieties in its recipes. To enjoy the cuisine of India you have to find a good and authentic Indian restaurant in West Footscray and thus taste the famous delicacies of this cuisine which will make you satisfy your taste buds and take pleasure in it.

A New Way to Spice up Your Platter