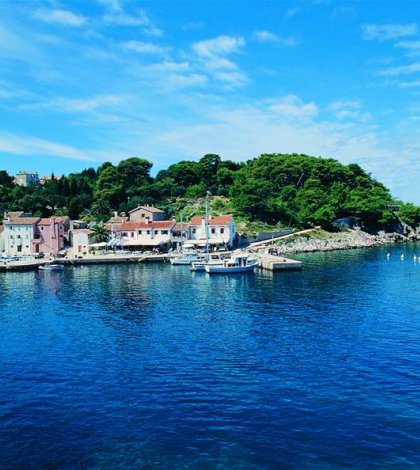 Croatia is a small gem hidden in the Central Mediterranean region. Its shores are perhaps not as well known as those of Spain, France, Italy or Greece, but each year a growing number of luxury tourists are choosing this enchanted location as the ideal vacation getaway.

This is a country that lives off and by the sea, and this passion is transmitted to all visitors, who find it easy to describe their fascination with the quaint towns, hospitable locals and sun-bathed beaches. One can say Croatia has a special charm, one I discovered with the joyful enthusiasm of a child, and to which I can return filled with nostalgia for a quieter, more pleasant lifestyle.

The former Yugoslav Republic is located at the foot of the Balkan Mountains, separated from Italy by the Adriatic Sea. The country is small, with just four million inhabitants, and covers an area of 35,165 square miles, of which the main tourist attractions are the more than one thousand islands that stretch beyond its shores. Like most Mediterranean destinations, there is abundance of beaches, cultural traditions and excellent gastronomy.

The pebbled beaches are intimate and their turquoise waters are pristine and calm. On shore, the major cities are steeped in history and bursting with monuments and archeological sites of great artistic and historic values. The cuisine has a strong Italian influence. Pasta and pizzas are of great quality, but many restaurants in the interior of the country have added their own signature to the imported cuisine. The closeness to the water is also felt in its gastronomy as fish and seafood are highlighted in the local cuisine: delicious oysters, mussels and eels, and a bounty that comes directly from the sea. It would be unfair to talk about Croatian gastronomy without mentioning the delicious beef and lamb roasts found in the best restaurants.

The one ingredient that is omnipresent in the cuisine of these parts is the extraordinary local olive oil. Dubrovnik is Croatia’s most cosmopolitan city. It was severely damaged during World War II, and later during the civil war that ravaged the Balkans. But Croatians have done a great job of rebuilding the city, keeping its historic spirit. It is difficult to say if the old town is most beautiful seen from atop the surrounding hills, or exploring its narrow streets. Walking within the ancient city walls is like traveling back in time and stumbling into a large medieval town. The stone buildings that line the historic center have large square or Gothic windows, arched arcades, charming streetlights and other details that speak loudly of the fine taste of its inhabitants.

Suddenly, as you walk through the old town, you will undoubtedly run into a cliff from where to dive into the sea below. Croats are very resourceful. There is no need for a daybed and a butler here. Among the rocks they can set up four chairs and a table, which doubles as a bar, and let the fun begin. There is a lively terrace atop the city wall where locals and tourists gather for drinks to a soundtrack that includes joyous laughter, the sound of the ocean crashing against the rocks, and the chill out music that spills onto the streets from the surrounding bars and restaurants.

These amenities have turned Dubrovnik into the most popular spot in the country. It is loud and lively, so if you are looking for a quiet vacation, we recommend you venture inland into more traditional Croatian territory. If you wish to stay within the city walls, the Pucic Palace Hotel, set within a 17th century manor house, has only 19 exclusive rooms, which will make you feel as a nobleman during the high Renaissance. But if you prefer a place to relax in comfort and luxury, Villa Dubrovnik is located high on a cliff with amazing views of Lokrum Island and the Adriatic Sea. It offers a complete range of high quality amenities, including private beach, spa and fitness centers, indoor swimming pool and solarium, as well as saunas, Turkish bath, and facilities for water sports.

The city of Split is almost the antithesis of Dubrovnik. It does not follow the perfect layout of the surrounding towns. Here it is easy to lose yourself amid the labyrinth of streets that lead to nowhere, so narrow only person can walk through them. UNESCO has declared the historic center of Split, as well as that of Dubrovnik, World Heritage Sites. The old part of town revolves around the palace built by the Roman Emperor Diocletian between the 3rd and 4th centuries AD, which features remarkable archaeological sites, such as the Temple of Jupiter, the Domnio Cathedral and Diocletian’s Mausoleum. But Split is also a youthful and modern city with a wide range of leisure activities. Its seaport is perfect to rent a boat and sail for a few days to explore the Croatian islands. There are plenty of options to charter a sailboat or catamaran with or without skipper and crew. Away from tourist crowds, to the north of Croatia and near the border with Slovenia, we found the coastal city of Opatija, long considered the favorite vacation spot of the Adriatic elite. It has been called the Croatian Marbella and the Austrian Nice.

Since the middle of the 19th century, the Austro-Hungarian aristocracy came here to unwind both during summer and winter. It still preserves a luxurious Belle Epoque feel, with elegant boutiques, lunch-bars, manicured parks and a long seaside promenade. It is a more relaxed option than either Dubrovnik or Split, perfect for shopping sprees and total relaxation.

The villas that were once home to the Central European nobility, have been turned into charming luxury hotels and wellness centers. Perhaps the most interesting is the Milenij Hotel, which has a privileged location in the center of town, next to the Lungomare promenade and with views of one of the city symbols: the statue of the girl and the seagull, an image that will stay embedded in our minds, not as the farewell to a wonderful trip, but as an alluring reminder that Croatian culture and hospitality have endured hard times throughout history, only to come back as the hidden gem of the Eastern Adriatic Sea.

Nathaniel Stillman
Related Topics:Travel
Up Next

5 Exotic Places To Visit In Taiwan