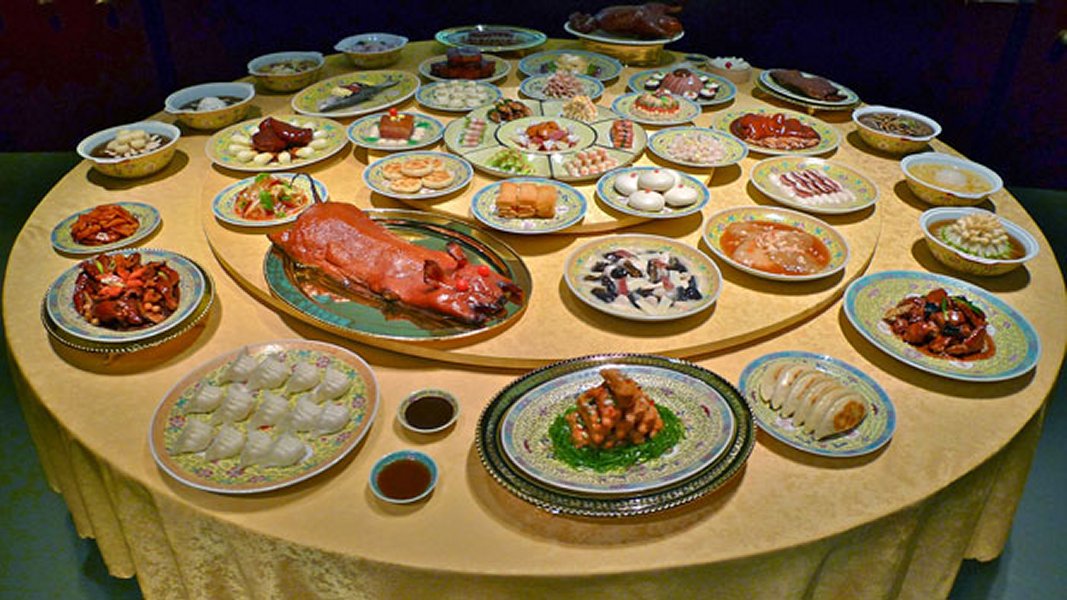 The Chinese have always loved food, and have lately begun to display a keen interest in their culinary heritage. This has spawned a crop of new museums all about food, and the many ways it has been cooked across the centuries.

The round table is set with a banquet of more than 40 dishes, including legendary delicacies such as a whole bear’s paw, surrounded by the tongues of little fish, steamed civet cat with pears, and bird’s nest soup. It looks so appetising – but unfortunately none of it is edible. This entire, gorgeous spread, rotating slowly before my eyes, is made from painted plastic. It’s a museum reconstruction of dishes from the most famous meal in Chinese history, the Man-Han banquet of the Qing Dynasty court which is said to have represented the pinnacle of the culinary skills of the Han Chinese and their Manchu conquerors.

The cuisine museum in the eastern city of Hangzhou is one of a growing number of food museums in China, but it’s probably the most magnificent. It occupies a large site in the scenic hills on the outskirts of town, and was built at a cost of nearly $30m. Unlike the more modest food museums in cities such as Chengdu and Kaifeng, which are run by private collectors, the Hangzhou museum has been funded by the city government, and entry is free of charge.

The Chinese are famously obsessed with food, but until recently food culture was something most people took for granted. The last few years, however, have seen a surge in interest in China’s culinary heritage, with a boom in the publishing of gastronomic memoirs and cookbooks, and feverish public interest in the 2012 television series, A Bite of China, an encyclopaedic documentary on Chinese cuisine.

The Hangzhou museum has literally hundreds of life-sized models of mouth-watering food. Visitors can feast their eyes on replicas of Buddhist vegetarian dishes, snacks eaten by canal-dwellers in the Middle Ages, and the delicate sweet pastries made in Hangzhou during the Song Dynasty, 800 years ago. There’s a whole cabinet filled with different kinds of zongzi – the leaf-wrapped rice parcels eaten at the Dragon Boat Festival each spring, illustrating their historical evolution.

Part of the gallery is devoted to the Qing Dynasty poet and gourmet Yuan Mei. Various editions of his famous cookbook are on display, along with a bust of the man himself, and, of course, replicas of many of his finest dishes. And if you ever wanted to know what a diplomat visiting Hangzhou in the 12th Century might have had for dinner, it’s all there in front of you, a table of some 30 dishes including wine-pickled crab, smoked rabbit and some steamed buns known as “dimpled cheeks”.

Every delicacy in the museum is presented in a dish appropriate to its historical period, and referenced to a classic text.

The man behind this labour of love is veteran master chef Hu Zhongying, who was put in charge of the gastronomic aspects of the exhibition. He and his team spent two years researching the dishes, and six months working with the kind of food technicians who make models of sushi for Japanese restaurants. They cooked every recipe, photographed the dishes and then used them to make moulds, which were cast and painted in lifelike detail. (Conservationists will be relieved to hear that they didn’t use real bear’s paw for the Man-Han banquet centrepiece – a notice reminds visitors that the museum does not support the consumption of endangered species).

What’s most remarkable about this glittering temple to Chinese gastronomy is that it’s not even a provincial food museum, let alone a national one – it’s dedicated to the cuisine of a single Chinese city. But then Hangzhou is a special case, with an unusually rich culinary history. In the 12th Century the Song dynasty court fled here after being driven south by barbarian invaders, and the city became known for its lively nightlife, bustling markets and delicious food.

The city also lies in one of China’s most fertile agricultural regions, and is blessed with an abundance of produce from land, river, lake and sea. As Hu explains, several other cities have been inspired by the Hangzhou example to propose their own municipal food museums, but few have such rich material on which to draw.

Marco Polo reflected this when he wrote about Hangzhou, which he called Kinsai, in the 13th Century. He described 10 market places, in each of which 40,000 to 50,000 people would gather three times per week.

“There is always abundance of victuals, both wild game, such as roebuck, stags, harts, hares, and rabbits, and of fowls, such as partridges, pheasants, francolins, quails, hens, capons, and as many ducks and geese as can be told,” he wrote. “Every day a vast quantity of fish is bought upstream from the ocean, a distance of 25 miles. There is also abundance of lake fish, varying in kind according to the season… Seeing the quantity on sale, you would imagine they could never be disposed of. But in a few hours the whole lot has been cleared away – so vast are the numbers of those accustomed to dainty living, to the point of eating fish and meat at one meal.”

These days, although the Chinese seem to be waking up to the glories of their culinary culture, many people worry about a decline in popular cooking skills. Chefs complain that the younger generation are unwilling to ‘eat bitterness’, to work hard enough to master the arts of professional cookery.

The museum’s manager, Wu Xiongxin, says he and his colleagues hope their work will help to preserve the traditional crafts of the kitchen. They run cooking classes for local people, street food fairs and special days for children to learn how to make tofu, cure ducks and pickle vegetables.

Of course, visiting such a museum can make the stomach rumble, but there’s no need to panic, because just beyond the galleries there’s a huge restaurant serving many of the classic dishes from the exhibition. It can, says Wu, feed up to 1000 people at the same time, in the main dining area, the 39 private rooms and the vast banqueting hall, and most guests end up staying for a quick bite. The revenue from the restaurant now sustains the museum. Outside, there’s a broad terrace overlooking a pond where visitors can linger for a cup of Hangzhou’s famous Dragon Well green tea.

By the time I reach the rotating Man-Han banquet, I am feeling awestruck, yet again, at the brilliance of Chinese food culture. “It’s amazing, isn’t it?” I say to the Chinese man standing next to me, as a suckling pig glides past. “Yes,” he says. “You Westerners just eat sandwiches, hamburgers and that kind of thing. We’re a little more particular about our food.” Normally, when Chinese people make this kind of remark, I am fierce in my defence of European cuisines. But somehow, faced with this dazzling pageant of gastronomy from the last eight centuries, I feel I am on shaky ground. For once, I just shut up.

Related Topics:The cuisine museumTravel
Up Next