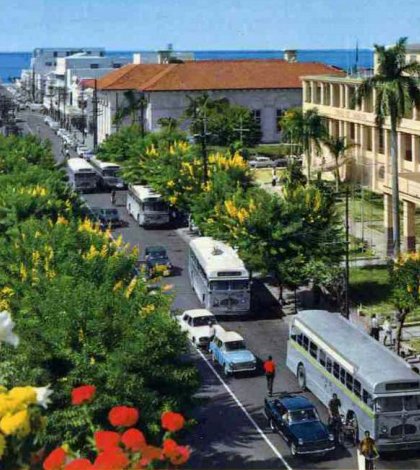 Many languages in Caribbean

A wide range of languages are spoken in the Caribbean today. Many people still speak the languages of the European countries that colonized the islands including Spanish, English, French and Dutch. Slaves developed their own versions of these languages, called pidgin and creole.

A second wave of settlers arrived in the 19th century and brought new languages such as Hindi, Urdu and Chinese. Immigrants from India and their descendants became known as East Indians to distinguish them from the existing Caribbean people, or West Indians.

Some of the Caribbean languages spoken today are combinations of as many as six other languages. Fuptemento is spoken in Aruba and the Netherlands Antilles. It includes words taken from Spanish, Portuguese, English, Dutch and African languages, as well as from the local native language.

Before the rapid growth in tourism and trade, most of the region’s inhabitants worked in agriculture. Now, over half the population lives in urban areas. Fewer people live in rural villages and work the land.

Towns and cities throughout the Caribbean grew dramatically during the last century. More and more people left the countryside, hoping to find better jobs and more comfortable living conditions in urban areas. Despite this, Caribbean cities remain relatively small. Only a handful have populations of more than a million people.

A few of the largest cities have busy, multi-lane roads lined with high-rise office blocks, but most are less developed. The region’s picturesque coastal towns are popular with tourists. Yachts line the modem marinas and cruise liners dock at the quays. Grand buildings and imposing monuments from the colonial era still stand in many places, giving the towns an historic flavour.

Kingston, Jamaica: Over half a million people live in the Jamaican capital, Kingston, and about 200,000 more in the surrounding suburbs. Kingston was founded in 1692 and built to a neat grid system. Its name means ‘king’s town’ and honours the British king, William III. Jamaica became a British colony in 1655. At Port Royal, 17th century cannons still point out to sea. They were there to defend the island against Dutch, Spanish or French attack.

Street Markets: People from urban and rural areas meet at the many fruit and vegetable markets. Country people bring surplus produce from their plots into the towns to be sold. The food on sale includes root vegetables, such as yams and eddoes, as well as plantains, bananas and squashes.

4 Characteristics Of Taiwan As A Tourist Destination