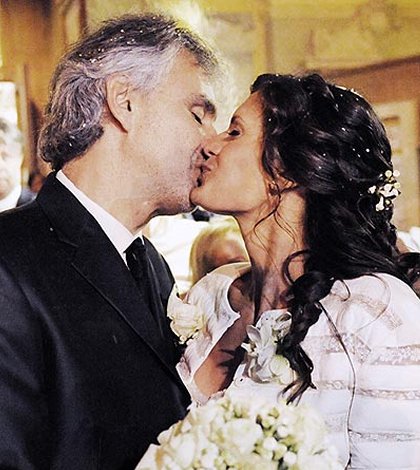 It was finally time to say “I Do.”

Andrea Bocelli, 55, married Veronica Berti, 30, his girlfriend of 12 years, in an intimate ceremony at the Sanctuary of Montenero in the coastal town of Livorno, Italy over the weekend, reps have confirmed to PEOPLE.

The Italian Tenor and his longtime companion said they chose their March 21 wedding date not only because it signified the start of spring, but because it’s also the date of their daughter Virginia’s second birthday.

Only a handful of close friends and family were at the ceremony, including Bocelli’s two sons, Amos, 19, and Matteo, 16, with his first wife Enrica Cenzatti, with whom he split in 2002.

The bride wore an Ermanno Scervino double silk dress, while Bocelli donned a blue Corneliani suit. Following the ceremony, friends and family retreated to the couple’s home in Forte dei Marmi near Pisa to continue the celebrations.

It is the first marriage for Berti, and the second for Bocelli.