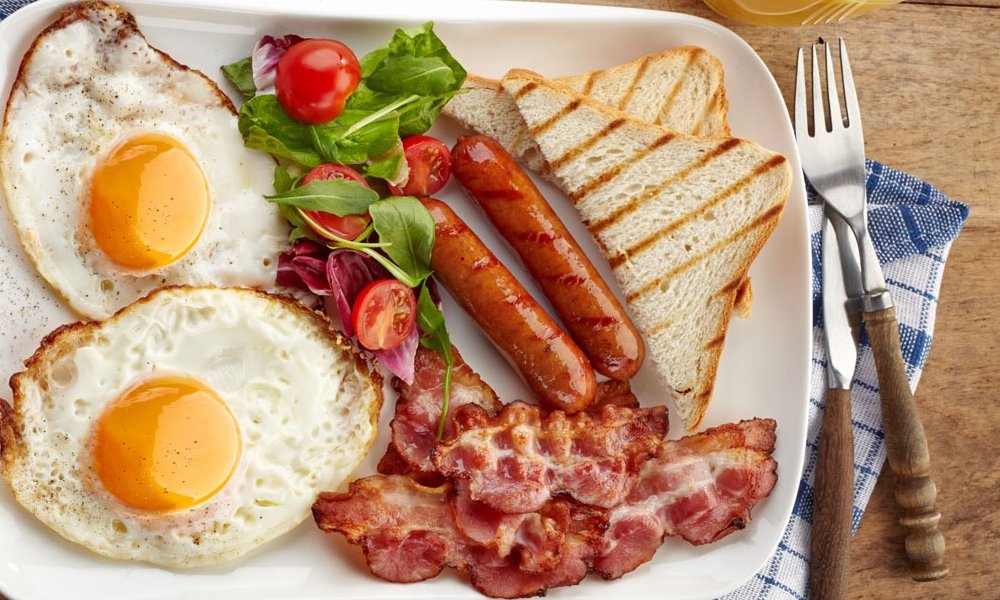 Good news if you love yourself a morning avo toast: Eating lots of the right fats first thing might help you lose weight in the long run. “Along with protein and fiber, fat fills you up,” says Lindsey Pine, R.D. “Including fat in your breakfast is a great way to keep those mid-morning hunger pains at bay.”Dietary fat builds cells and nerves, supports muscles, fights inflammation, and allows your body to absorb certain vitamins and minerals, says Brigitte Zeitlin, R.D., owner of BZ Nutrition. Unsaturated fats, specifically, help keep your cholesterol in check and your heart healthy, too. Zeitlin suggests incorporating healthy (mostly unsaturated) fats from vegetables, nuts, seeds, and fish into every meal; just be sure to avoid trans fats (usually found in bakery products). “If you see the words ‘partially hydrogenated’ in the ingredients list, don’t buy it!” says Pine.Most people should aim to get around one-third of their total calories from fat per day, she adds. If you’re eating 2,000 calories per day, that means aiming for about 20 to 25 grams of fat at breakfast. Start the day off right with these high-fat morning meals:

“I’m definitely a believer in using the whole egg,” says Pine. “The yolk has so many vitamins and minerals, including vitamin D, which can be challenging to get from food.” One yolk contain five grams of fat plus choline, which helps support brain function, she adds. The tahini (sesame paste) in this egg salad toast not only adds 16 grams of healthy unsaturated fat and great flavor, it also contains cholesterol-lowering compounds. Peel two hard-boiled eggs and separate the yolks from the whites. Chop the whites and add to a bowl with the yolks. Add two tablespoons freshly-chopped dill, two teaspoons tahini, one teaspoon lemon juice, and a pinch of kosher salt to the eggs, and mash until well-combined. Season with more lemon if you like, then top on two slices of whole-wheat toast. 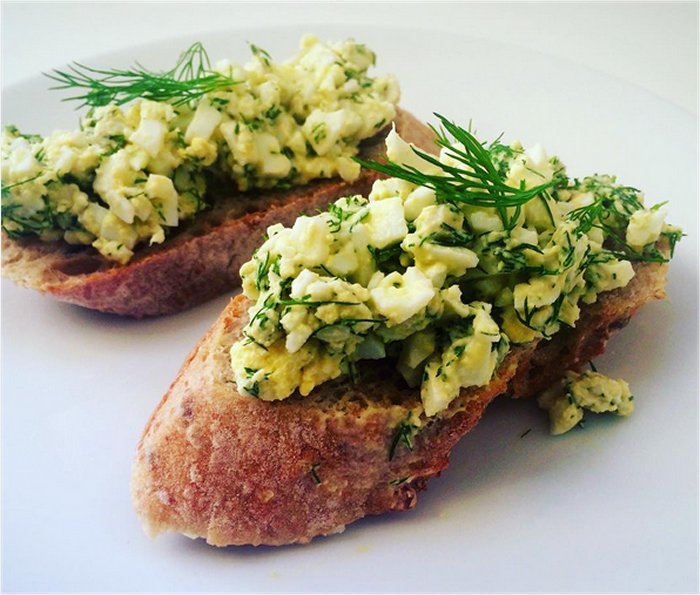 One serving of full-fat yogurt serves up 10 grams of fat to help keep you full all morning. “Full-fat yogurt only, people! It has more flavor, less sugar and less sodium than any non-fat version,” says Zeitlin. She suggests scooping yogurt into a bowl and adding two tablespoons of walnuts for an extra 12 grams of healthy, filling fat; top with a sliced banana or a diced apple with a touch of cinnamon. Isabel Smith, R.D., suggests making a parfait with four to six ounces full-fat coconut or Greek yogurt mixed with one tablespoon of the nut butter of your choice. Top with one tablespoon coconut shreds and one teaspoon of your favorite nuts. 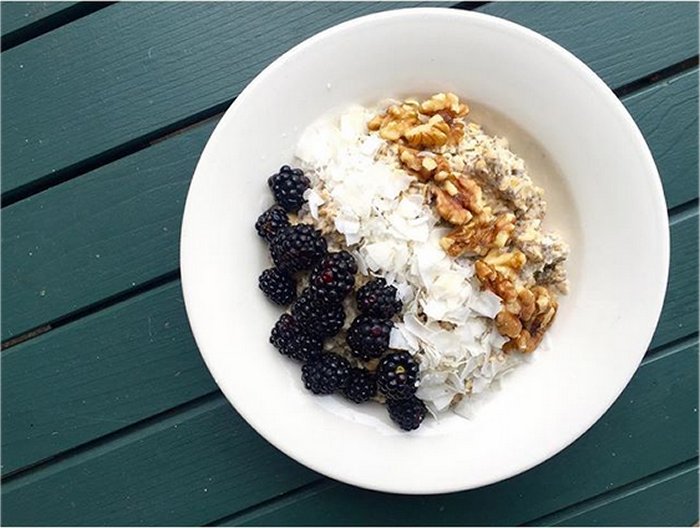 For a fall weekend treat, try this filling paleo-friendly and gluten-free baked pear recipe. “The nuts add nine grams of heart-friendly monounsaturated fats,” says Allison Schaaf, R.D. For two servings, throw one-eight cup coconut oil, two to three Medjool dates, one-eight cup dried cherries, one-quarter cup pecans, one-quarter teaspoon vanilla, and one-quarter teaspoon cinnamon into a blender and blend until roughly chopped. Core one pear and cut in half, then fill each side with the mixture. Bake, covered, at 375 F for 30 minutes. Uncover and bake for an additional five to 10 minutes until browned. 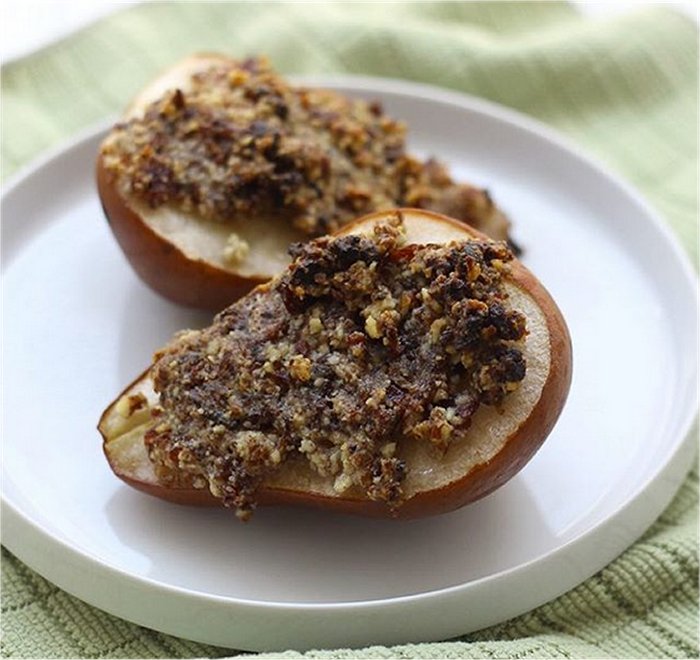 Almond butter serves up about 18 grams of healthy fat per serving to keep you focused and satisfied all morning long, says Zeitlin. To make this toast, spread two tablespoons of all-natural nut butter (or sunflower butter, if you’re nut-free) on two fiber crackers. Sauté a half-cup of blueberries in a pan for about three to five minutes, until they start to swell, pressing down lightly with a spatula to help them open up. Sprinkle evenly over the crackers with a touch of unsweetened shredded coconut and one teaspoon of chia seeds for another two grams of fat and added fiber. Zeitlin also suggests spreading nut butter on a slice of whole-wheat toast and topping with fresh raspberries for a new take on PB&J. 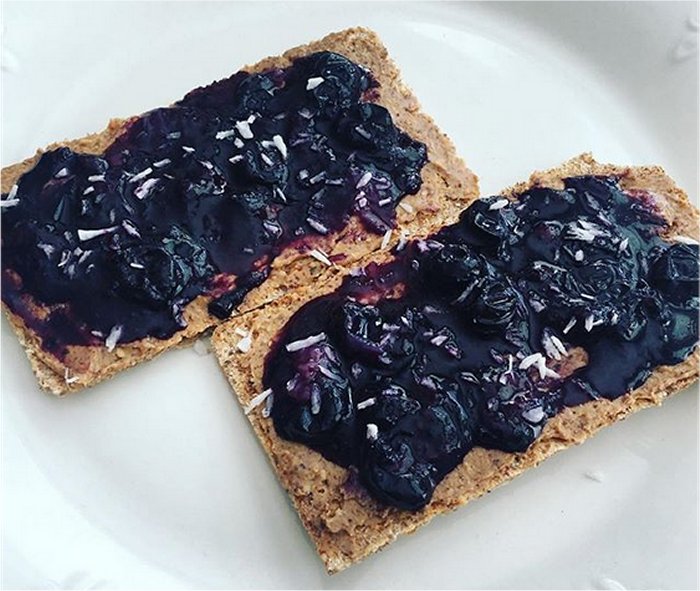 In moderation, the eggs and cheese in this frittata are great sources of good-for-you fats to help slow digestion and support stable blood sugar—key for preventing mid-morning hanger. “As a dietitian, I love that a frittata is also a great vehicle for vegetables,” says Jess Cording, R.D. Preheat your oven to 400 F. Heat one tablespoon olive oil over medium heat, and then cook one small chopped yellow onion until translucent, about two minutes. Add one clove minced garlic and cook about one minute until fragrant. Add one-quarter cup white wine and cook down a minute or two before adding one large yellow squash, cut into half-moons. Cook until it begins to soften and brown, about six minutes. Toss in four cups chopped kale and cook until wilted, about four to five minutes. Set aside. Whisk together eight eggs and one-third cup grated cheese of your choice (cheddar or parmesan would work well) and pour over veggies. Bake at 400 degrees for 35 to 40 minutes or until eggs are set. Allow to sit 10 minutes before slicing; serves two to four people. 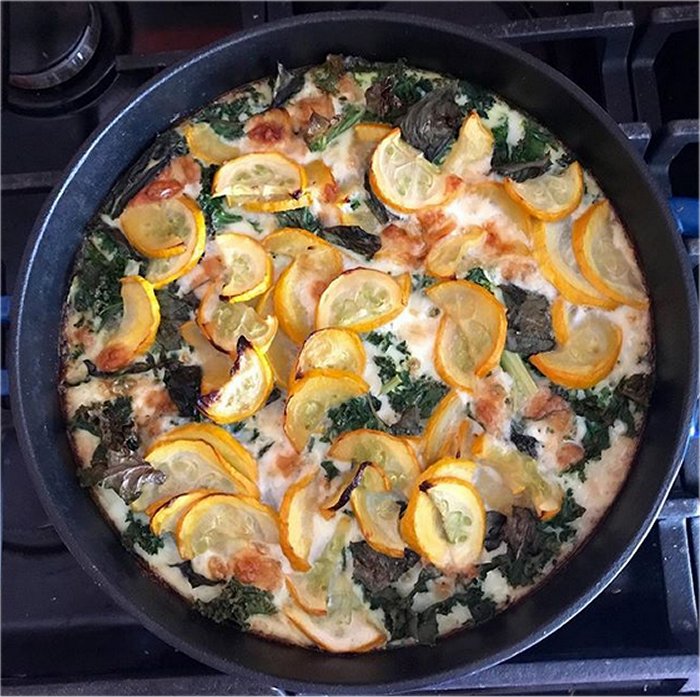 “Avocado is one of the most delicious sources of healthy fats and also happens to be one of the most versatile,” says Zeitlin—and one cup gives you about 20 grams of good-for-you fats. Mash up one small-to-medium avocado with a fork until your desired chunkiness and spread on a slice of whole-grain toast. Top with fresh cracked pepper and one to two tablespoons of pumpkin seeds for crunch and an extra dose of healthy fat. 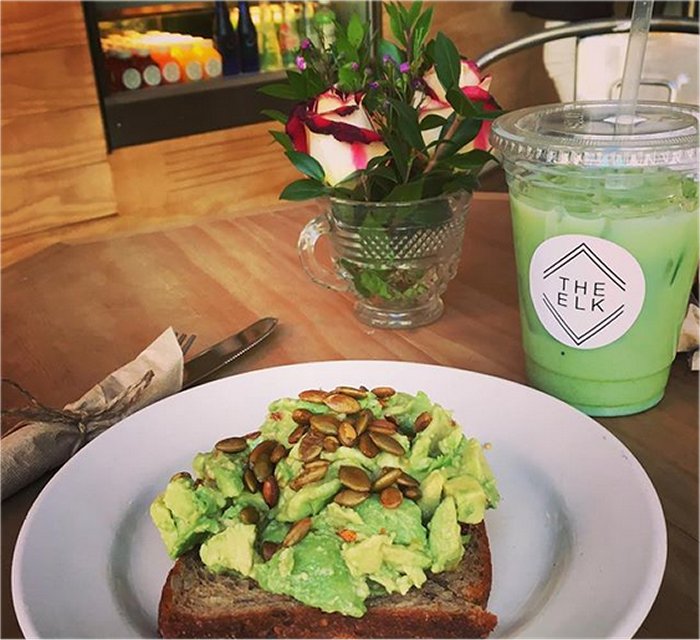 Christy Brisette, R.D., recommends this super-healthy smoothie because it’s loaded with nutrient-rich greens, hemp hearts for a serving of the antioxidant vitamin E, and avocado for a healthy dose of omega-3 fats. Combine one cup water, one cup baby spinach, one-half cup parsley, one-half cup microgreens, two stalks celery, half of an avocado, one-third of a cucumber, the juice from half a lime, and two tablespoons hemp hearts in a blender. Mix until smooth and enjoy! 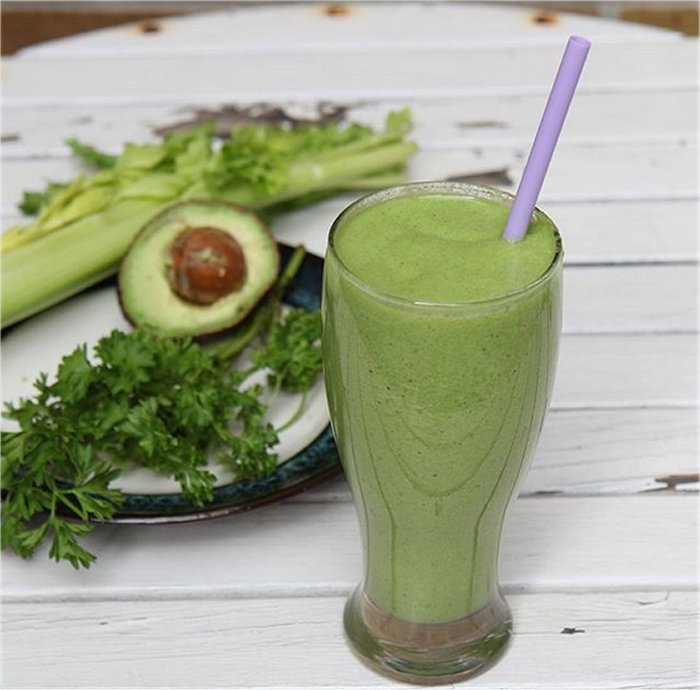 Mammograms Are No Joke – They Can Save Lives