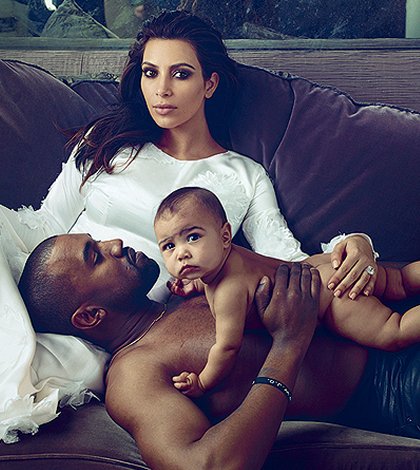 Kim Kardashian is delighting in having a daughter to dress — but it’s not exactly all pink princess gear.

The Keeping Up with the Kardashians star, 33, who appears with her fiancé Kanye West on the April cover of Vogue, is seen posing with her partner and their 9-month-old baby girl North in a new image released from the feature.

“I take pictures of her all the time and dress her up,” Kardashian tells the magazine. “I put Kanye’s big chains around her and I put a little Louis bag and some Jordans, and I was like, ‘What up, Daddy?’ “

The tight-knit trio is lounging on the couch, but while Kardashian dons yet another white gown, the daddy-daughter duo keep their style simple: West goes shirtless and North’s only accessory is her adorable pouty frown.

“Kanye’s side of the family calls her Nori,” the new mom reveals.

As for North’s famous father? He can’t get enough of his little girl.

The proud dad has created a video compiled of North’s movements, which he has edited to make it look like she’s break dancing.