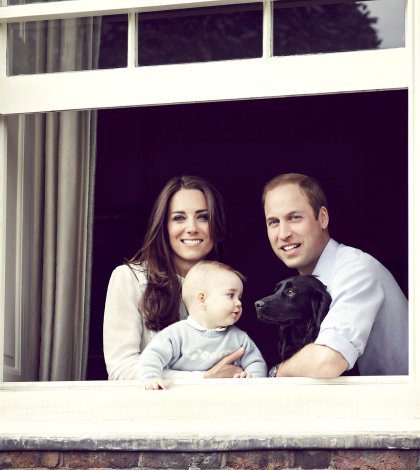 Prince George may only be 8 months old, but he’s already stealing the royal limelight with his adorable fashions.

While posing for the recent official photograph with his parents, the Duke and Duchess of Cambridge, and dog Lupo at Kensington Palace, the little prince sported a powder blue knit top bearing his name.

The bespoke cashmere jumper was gifted to Prince Charles by Welsh knitwear brand, Corgi and the doting grandfather was only too happy to pass it on.

“We were thrilled when we noticed that he was wearing our gift,” Chris Jones, a director at the company, said in a statement. “It was a lovely, natural family photo,” he added.

Established in 1892, Corgi is known for its luxurious handmade socks and knitwear – an adult-size jumper “could cost up to $832.” They’re also a favorite of Prince Charles, who awarded the family-run company a Royal Warrant in 1989.

“He gets his socks from us on a regular basis,” a spokesperson for the company told PEOPLE.

Handmade from the “finest cashmere” in the small town of Ammanford, in Carmarthenshire, this particular design was made especially for Prince George.

However, any parents coveting the prince’s adorable knit should continue to check the company’s site. “It’s something we might consider offering in the future,” said the spokesperson.

One thing we can be sure of – Prince George’s royal tour wardrobe will not disappoint.

Nicole Kidman Goes Brunette: Are You Loving Her New Look?